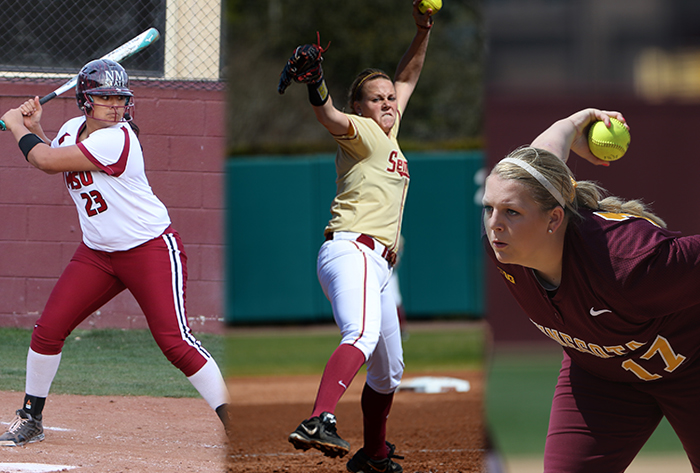 Finau hit .579 (11-for-19) with three doubles, three home runs and 13 RBI over a six-game stretch last week. The Chula Vista, Calif. native slugged 1.211, registered a .600 on-base percentage and scored five runs. She went 3-for-3 with a double, home run and four RBI in a win over Rio Grande rival New Mexico. The senior slugger stroked a game-winning two-run home run against Maine and went 3-for-4 with a double and four RBI versus East Carolina.

“I’m honored to have this amazing recognition,” said Finau. “This wouldn't have been possible without the outstanding support of my teammates, coaches, University and family. Even though this award was given to me, this truly belongs to my teammates and coaches. Without them, we would never have the opportunity to excel as a group. They always have my back and I couldn't be more honored to bring recognition to our team. Aggie Up!”

Finau recorded a hit in five of six contests and put together four multi-hit games. The WAC Hitter of the Week posted two hits with a double against USF, while scoring twice and knocking in two with a long ball versus Detroit Mercy.

“Fiana did a great job last week,” said New Mexico State head coach Kathy Rodolph. “She is a top-tier hitter and we are very proud that she has been acknowledged by the NFCA.”

King, hailing from Parkland, Fla., made history last week recording the first perfect game at Florida State since 2004. She struck out five as she stymied Tulsa over six innings in an 8-0 victory. The redshirt freshman only allowed one ball to leave the outfield and was very efficient as she used just 63 pitches to retire 18 Golden Hurricanes.

“It's an honor to be recognized as Co-National Pitcher of the Week,” said King. “It was a huge accomplishment for our team to have a perfect game. Throughout the countless reps in practice and game experience, I have learned to have the utmost trust in my defense. There were a few plays that were key to the game and it's awesome that my teammates give 100 percent on every single play. The entire pitching staff has great chemistry and it is amazing to work with them every single day. I can't wait to see what else we can accomplish as a team this season.”

For the week, King went 2-0 with a 0.00 ERA and held her opposition to a .057 batting average in two starts. She struck out six and did not walk a batter on her way to ACC Pitcher of the Week honors. In her other start, the southpaw twirled a two-hit shutout at Cal State Fullerton with one punchout.

“What an honor for our program,” said FSU head coach Lonni Alameda. “Our team has worked really hard and our pitching staff takes pride in being the best for their team and this is a great honor for our program. Meghan has put in the time and work to be the best person in the circle for this team and we’re looking forward to many more great appearances as the season continues.”

Groenewegen, receiving the honor for the second time in her career, made a little history of her own as well, becoming the first Gopher hurler to record a perfect game since 2002. The righty from White Rock, B.C. set down all 21 Owls and struck out 12 in a 1-0 victory at Florida Atlantic.

“I am honored to receive this recognition and I just want to thank my teammates for their defense behind me,” said Groenewegen. “Throwing a perfect game was special in itself, but having my team behind me the whole game was even more special.”

The junior righty went 3-0, allowed just two hits and struck out 22 in 14 innings of work. Holding her opposition scoreless, Groenewegen limited opponent’s hitters to a 0.45 batting average. She struck out six in three innings against UMass and fanned four more in four frames versus LIU-Brooklyn.

"This is a tremendous honor for both Sara and our program,” Minnesota head coach Jessica Allister said. “Sara had a great weekend in the circle. I am proud of the way she competed on the mound, and proud of the defense our team played behind her.”