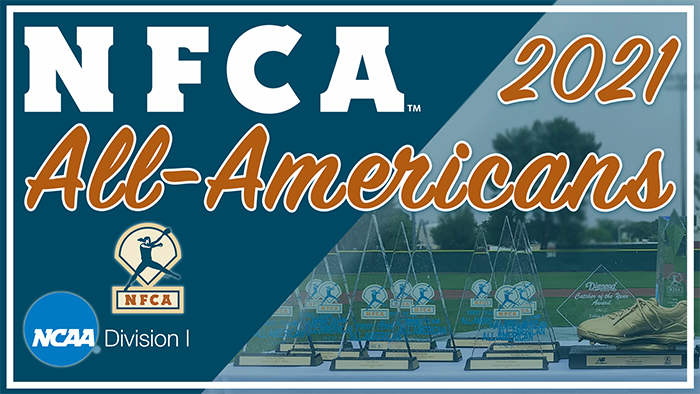 LOUISVILLE, Ky. –  Fifty-four student-athletes from 30 different institutions were selected to one of three 2021 NFCA Division I All-America teams, the Association announced on Wednesday afternoon. Additionally, the NFCA announced its annual Diamond Sports/NFCA Catcher of the Year and New Balance/NFCA Golden Shoe award winners.

The Southeastern Conference led the way with 17 honorees. The Pac-12 Conference had 15 representatives, while the Big 12 earned 10 plaudits. The Atlantic Coast Conference (5) and American Athletic Conference (2) also had multiple recognitions.

Seven of the eight programs participating in the 2021 Women’s College World Series totaled 22 All-Americans, 11 on the first team. Oklahoma and UCLA led the way with five selections each. Arizona had four honorees, while Alabama and Oklahoma each took home three honors. Florida State and James Madison earned one accolade apiece. The Bruins topped the charts with four first-teamers, while the Sooners had three and the Crimson Tide two.

This year’s teams are highlighted by the 37th four-time NFCA All-American,  Rachel Garcia, who is also a three-time unanimous first-team selection.

Garcia, the Pac-12 Player of the Year, enters her fourth straight Women’s College World Series with the nation’s second lowest ERA at 0.95. A top-three finalist for USA Softball Collegiate Player of the Year, Garcia is 17-1 on the year with six shutouts and 162 punchouts to just 21 walks in 118.1 innings of work. She has limited her opposition to a .165 batting average and allowed just three home runs. A dual threat, Garcia is batting .351 with 12 home runs, 32 RBI, a .729 slugging percentage and a team-best .486 on-base percentage.

For Fouts, this is the second honor for the junior hurler. The SEC Co-Pitcher of the Year heads to the WCWS with a 25-3 record, 1.49 ERA, nine shutouts and 314 strikeouts in 196.2 innings of work. Her 300-plus strikeouts are the most for an Alabama pitcher since 2017 and Fouts also set a program record with 20 double-digit strikeout games in 2021. A top-10 finalist for USA Softball Collegiate Player of the Year, Fouts is ranked in the NCAA’s top 10 in strikeouts, strikeouts per seven innings, shutouts and wins.

Mulipola takes home first-team honors for a second straight season. A first team NFCA All-Region and All-Pac-12 honoree, Mulipola comes to Oklahoma City leading the Pac-12 with 21 home runs and 63 RBI, along with the second highest slugging percentage at .901. Those numbers are currently seventh, third and 11th nationally. Mulipola is batting .401, with 57 hits, 52 runs scored and reaches base at a .533 clip. An All-Pac-12 defensive selection, she has not made an error in 219 chances and only eight runners have stolen a base against her.

Homering three times in her first collegiate game, Jennings is the nation’s top run producer with 84 RBI and 1.42 runs scored per game. The NFCA / Schutt Sports Freshman of the Year ranks second nationally with a 1.059 slugging percentage, is tied for second with 25 home runs, third with 22 doubles, fourth with 82 hits, and fifth in batting average at .485. Jennings, a top-10 finalist for USA Softball Collegiate Player of the Year, flashes the leather at second, recording just three miscues in 106 chances for a .972 fielding percentage.

UCLA’s Megan Faraimo and Virginia Tech’s Keely Rochard join Fouts as first-team pitchers. Faraimo, earning her first All-America honor, heads to the WCWS posting a 19-3 mark with a 1.10 ERA and 184 strikeouts in 133.1 innings. The first-team All-Pac-12 and NFCA All-Region selection is the national leader with a 15.36 strikeout-to-walk ratio, over six strikeouts clear of the next pitcher. Faraimo, a sophomore, earned a spot on the USA Softball Collegiate Player of the Year Top 25 list and is ranked in the NCAA’s Top 20 in fewest walks allowed per seven innings, hits allowed per seven innings and earned run average. She has registered eight double-figure strikeout games and allowed zero or one earned run in 22 of her 28 appearances.

Rochard is also taking home her first All-America plaudit. A workhorse in the circle, Rochard keyed the Hokies to their second Super Regional in program history. The nation’s top strikeout pitcher with 348 finished the season 29-10 with a 1.38 ERA and 13 shutouts. Rochard, the ACC Pitcher of the Year and top-25 finalist for USA Softball Collegiate Player of the Year, ranks third in the nation in wins and shutouts and is in the top 20 in ERA, strikeouts per seven innings and fewest hits allowed per seven innings. Rochard, a first team NFCA All-Region selection, recorded 14 double-figure strikeout games, including back-to-back 19-strikeout performances midway through the season.

Taking home first-team honors at first base is Oklahoma State’s Alysen Febrey. Leading the Cowgirl offense into the WCWS, Febrey is batting .409 with 72 hits, 17 doubles, 19 long balls, and an .813 slugging percentage. Additionally, her team-leading 59 RBI are tied for fifth in Division I, along with top-25 rankings in doubles, hits, home runs and slugging percentage. A Big 12 and NFCA All-Region First-Team honoree, Febrey has a 1.268 OPS, .455 on-base percentage and has recorded a hit in 45 of 56 contests this season.

Sami Williams from Iowa State captures her first All-America accolade earning first-team recognition at shortstop. Williams, a first-team All-Big 12 and NFCA All-Region honoree, put forth one of the top careers in Cyclone history. In 2021, she hit .446 with a program-record 21 home runs, 54 RBI and a .902 slugging percentage, ranking tied for seventh and tenth nationally in long balls and slugging. Williams ended her career as the all-time leader in several Iowa State categories, including hits, doubles, home runs, RBI and runs scored, while also leaving as the Big 12's all-time leader in base hits and doubles.

A pair of Sooners - Jocelyn Alo and Jayda Coleman - and UCLA’s Maya Brady make up the first-team outfield. Alo has powered herself to a third-straight NFCA All-America honor. The USA Softball Collegiate and Big 12 Conference Player of the Year is one of the premier offensive threats in the NCAA. She leads the nation with 30 home runs and a 1.135 slugging percentage, while ranking second with 82 RBI and 177 total bases, fourth with a .487 batting average, fifth with 1.25 runs per game and seventh in on-base percentage at .579. Alo, who opened the season with a 23-game hit streak, has reached base safely in all but one game this season and recorded at least one hit in 45 of 52 contests.

Coleman, a versatile player for the Sooners, was a top three finalist for NFCA / Schutt Sports Freshman of the Year. The rookie is batting .469 to go along with 47 RBI, 67 runs scored, nine home runs and 19 stolen bases. She has drawn 32 walks, contributing to a .578 on-base percentage. A NFCA First-Team All-Region and All-Big 12 selection, Coleman ranks third nationally in runs scored and runs per game at 1.29.

Brady earns her first All-America recognition in 2021. The freshman outfielder is tied for second on the Bruins with 12 home runs, third with 36 runs batted in, 31 runs scored, and 19 walks. She is batting .333 with six stolen bases and eight multiple-RBI contests. Brady owns a .441 on-base percentage and was named Pac-12 Freshman of Week twice in 2021. A first-team NFCA All-Region and All-Pac-12 honoree, Brady has hits in 33 of her 46 games, including an 11-game hitting streak earlier in the season.

Capturing UCLA’s fourth first-team honor is Aaliyah Jordan at the Designated Player or Utility Non/Pitcher position. It’s the second first-team accolade for Jordan, who also took home honors in 2018.  Jordan, a junior, is the team leader in walks with 33 and is second on the Bruins with a .471 on-base percentage and 35 runs scored. She comes into the WCWS batting .326 with 43 hits, nine doubles, eight home runs and 33 RBI. Jordan is an All-Pac-12 and NFCA All-Region first team honoree, and has registered 10 multiple-hit and eight multi-RBI games.

Hemphill, a graduate student, captured her second NFCA All-America honor with an at-large selection at catcher. The SEC Player of the Year is one of the toughest outs in Division I. A knack for getting on base, Hemphill is drawing almost one walk per game and has a .579 on-base percentage, ranking seventh and eighth nationally. She is batting .416 with 57 hits, seven doubles and leads the Crimson Tide with 12 homers, a .745 slugging percentage and 53 walks. A first-team NFCA All-Region honoree, Hemphill enters the WCWS three walks shy of the SEC career record.

Kowalik takes home her first NFCA All-America plaudit as an at-large catcher. Leading the nation with 100 base hits, Kowalik is also the lone Division I player hitting above .500 at .503, currently 16 points ahead of the next closest player, and leads the NCAA with 77 runs scored. A top-10 finalist for USA Softball Collegiate Player of the Year, she ranks second nationally, touching home plate 1.33 times per game and also set UK single-season records for batting average, hits and longest hitting streak at 23 games.

Haff earned her first All-America honor as a first-team at-large pitcher. The Co-SEC Pitcher of the Year keyed the Razorbacks to their first SEC regular-season championship, second consecutive Regional title and Super Regional appearance. Haff posted a 26-7 record with 198 strikeouts to just 39 walks in 198.1 innings of work. She recorded five shutouts, five saves and held the opposition to a .192 batting average. Haff ranks in the NCAA’s top 10 in wins and saves and was a top-10 finalist for USA Softball Collegiate Player of the Year.

Burnside collects her first NFCA All-America nod as a first team at-large selection at shortstop. One of the top power hitters in the NCAA, Burnside smashed the Razorback home run record and is tied for second nationally with 25 home runs. A top-10 finalist for USA Softball Collegiate Player of the Year, she ranks 11th nationally with 140 total bases, 13th with a .892 slugging percentage and 16th in walks per game. Burnside also earned first-team All-SEC and NFCA All-Region recognition.

Plain captured her third consecutive All-America honor on the first team as an at-large pitching selection. Plain, a top three finalist for USA Softball Collegiate Player of the Year, was the Huskies’ workhorse in the circle, posting a nation’s best 32-4 record with a 1.45 ERA, 337 strikeouts, 13 shutouts and a .174 opponents’ batting average in 237.1 innings. The Pac-12 Pitcher of the Year ranks second nationally in strikeouts, third in shutouts and 18th in strikeouts per seven innings.

Mulipola and University of Central Arkansas redshirt freshman Jenna Wildeman were named the Diamond Sports/NFCA Division I Catcher of the Year and New Balance/NFCA Division I Golden Shoe recipients, respectively. It marked the second straight honor for Mulipola.

Wildeman, the New Balance/NFCA Golden Shoe Division I winner, leads the NCAA with 56 stolen bases and is second at one swipe per game. A first-team NFCA All-Region honoree, Wildeman led the Southland Conference with 69 hits, which is tied for 23rd in the nation. She topped UCA with a .390 batting average and 43 runs, to go along with seven doubles and an on-base percentage of .435.

The Schutt Sports / NFCA Division I Player and Pitcher of the Year will be announced on June 10.