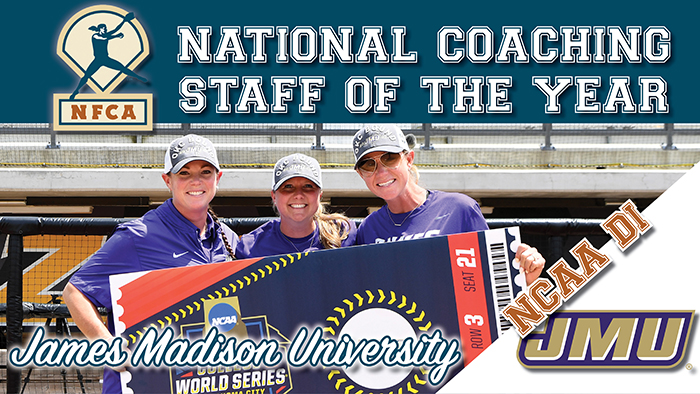 LOUISVILLE, Ky. – Highlighted by a historic run to the national semifinals, James Madison University was named the 2021 NFCA Division I National Coaching Staff of the Year, the Association announced Thursday afternoon. Voted by their peers, head coach Loren LaPorte and her staff take home their first national honor from the Association.

LaPorte, along with associate head coach Jennifer Herzig and assistant coach Libby Morris, steered JMU to the program’s first Women’s College World Series appearance where it made history. With a pair of one-run wins over No. 1 overall seed Oklahoma and No. 5 seed Oklahoma State, the Dukes became the first unseeded program to capture their first two games at the WCWS as well being the first ever to reach the semifinals.

Earning honors as the NFCA’s Northeast Region Coaching Staff of the Year, LaPorte, Herzig and Morris guided JMU to Colonial Athletic Association regular season and tournament titles. The Dukes, who lost only one regular season game, finished 41-4 and 17-1 in the CAA. LaPorte, who just finished her fourth year at the helm, is 148-34 overall and has led the Dukes to back-to-back Super Regionals and three straight Regionals.