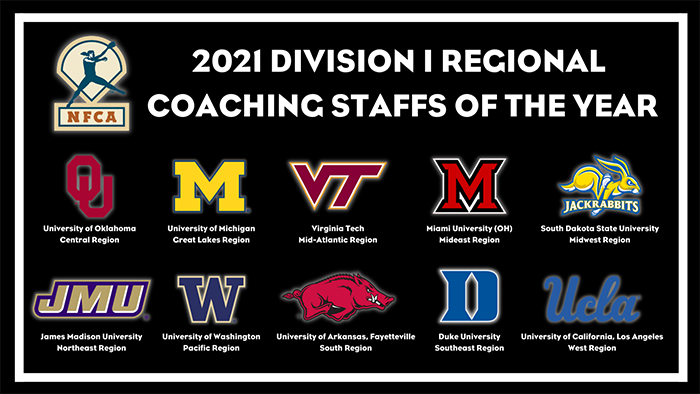 LOUISVILLE, Ky. – Ten programs were honored by the NFCA as 2021 Division I Regional Coaching Staffs of the Year, the Association announced on Thursday afternoon.

NFCA Regional Coaching Staffs of the Year are voted by member Division I head coaches in each respective region. The voting window for this award was May 21 to June 2.

Made first-ever NCAA DI postseason appearance … Won their NCAA DI tournament debut with a 7-1 victory over Stanford … Steered Jackrabbits to most successful season in program history … Matched program record for victories, reaching the 40-win plateau for only the second time … Only suffered back-to-back losses once all season and was shut out only once … Set program mark with 73 home runs … Wood was named Summit League Coach of the Year … Cylie Halvorson, Tori Kniesch and Grace Glanzer were named Player, Pitcher and Freshman of the Year.

National semifinalist … First unseeded program to win first two games and reach semifinals at WCWS … Posted 7-3 mark during postseason run all away from home … 2-2 at WCWS with wins over No. 1 Oklahoma and No. 5 Oklahoma State … Topped No. 8 Missouri 2-1 in the Columbia Super Regional … Swept the Knoxville Regional as No. 3 seed with wins over No. 9 Tennessee and nationally-ranked Liberty (twice) … Lost one game during the regular season … Won CAA regular season and tournament titles.

Made sixth-straight appearance and 30th overall at the WCWS … Swept through Los Angeles Regional as No. 2 overall seed … Rallied from a game-one loss to Virginia Tech to win sixth straight Super Regional … Won 11th Pac-12 title and their first solo championship since 2009 … Inouye-Perez was named Pac-12 Coach of the Year and Rachel Garcia earned Player of the Year honors … Owned 13 and 14-game win streaks in 2021 … Ranked top four nationally all year, including second since March 16 USA Today/NFCA DI Top 25 Coaches Poll.