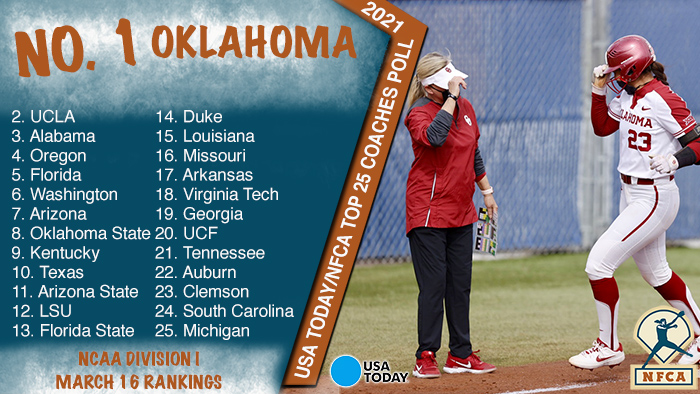 LOUISVILLE, Ky. – Oklahoma extended its unbeaten start to 22 games and is the unanimous No. 1 in this week’s 2021 USA Today/NFCA Division I Top 25 Coaches Poll. The Sooners (22-0) received all 32 first-place votes and 800 points.

Co-hosting the Hall of Fame Classic, OU sandwiched a pair of run-rule wins over Houston (9-1) and Liberty (16-0) with late-inning victories versus Kansas City (6-2) and the Lady Flames (5-4). Additionally, they topped UT Arlington, 14-0, in a mid-week tilt. The Sooners welcome Team Mexico for three exhibition games over the upcoming weekend before Big 12 play opens the following weekend.

Moving up into the No. 2 through 6 spots were UCLA, Alabama, Oregon, Florida and Washington as Arizona stumbled in its trip to the Sunshine State and dropped from No. 2 to No. 7. The Bruins (15-1) rattled off five non-conference wins at home, including the final four via shutout in doubleheader sweeps of UC Santa Barbara and UNLV.

The Bruins and Ducks open Pac-12 play at home this upcoming weekend, hosting No. 11 Arizona State and Utah, respectively, in four-game series.

The Crimson Tide (22-1) opened Southeastern Conference (SEC) play with a road sweep of in-state rival and then-No. 21 Auburn, and the Ducks (16-1) topped Sacramento State twice and Oregon State once at home. In three tightly-contested matchups, the Gators (17-2) took two-of-three from No. 9 Kentucky in SEC play and also blanked Kennesaw State in mid-week action.

The sixth-ranked Huskies (20-2) extended their winning streak to 10 games with two victories each over Seattle and Portland State in their first home games since the 2019 Super Regionals. Washington remains at home this weekend as it opens Pac-12 play with a four-game set against the seventh-ranked Wildcats (14-3).

The aforementioned Arizona Wildcats closed out their seven-game trip to the state of Florida with a 2-3 showing last week, going 1-3 against nationally-ranked foes. They picked up a 1-0 victory in game two of a three-game series against then-No. 15 Florida State. UA fell in the opener and finale to the Seminoles (13-5) as well as being shut out at then-No. 22 UCF.

No. 8 Oklahoma State, co-host of the Hall of Fame Classic, swept a twinbill from Liberty before having its eight-game winning streak snapped by Houston.

Kentucky and No. 10 Texas remain in their spots to close out the top 10. After dropping their first two games of the season to the Gators, the Wildcats (20-2) rebounded with a game-three 4-2 win in the series finale. The Longhorns (15-2) enjoyed a 5-0 week at home with four in-state victories and one against BYU.

The 2021 USA Today/NFCA Division I Top 25 Poll is voted on by 32 NCAA Division I head coaches, one representing each conference. Records reflect games played through March 14. Programs not competing in 2021 will not be eligible for ranking consideration.

The 2021 USA Today / NFCA Division I Top 25 Coaches Poll is voted on by 32 NCAA Division I head coaches with one representing each of the NCAA’s Division I Conferences. Records reflect games played through March 14.