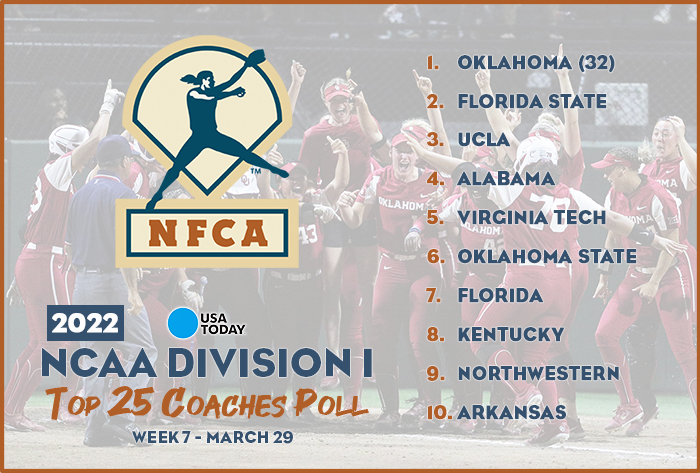 LOUISVILLE, Ky. – Oklahoma maintained its hold on No. 1 and the top five remained intact in this week’s 2022 USA Today/NFCA Division I Top 25 Coaches Poll. The Sooners (29-0) were part of a top five that went a perfect 19-0 last week.

OU needed a two-out walk-off home run by Tiare Jennings to edge Baylor 3-1 and complete the sweep in its Big 12 opening series. Prior to Sunday’s nail biter, the Sooner posted two eight-run wins over the Bears and a third on the road at No. 8 Kentucky.

No. 4 Alabama (28-4) went on the road for a win over UAB and three in Southeastern Conference action at South Carolina. Also on the road, Virginia Tech (25-3) swept a doubleheader from in-state foe Longwood and took the first two Atlantic Coast Conference matchups against Pitt before the finale was canceled.

Kentucky stayed at No. 8 going 2-2 last week, Rebounding from a non-conference defeat by the Sooners, the Wildcats (22-7) captured their SEC series against then-No. 18 with triumphs in games one and three.

Northwestern and Arkansas round out the top 10. The Wildcats (22-4) at No. 9 are riding a 12-game winning streak after sweeping Michigan State to open Big Ten play. The Razorbacks (21-6) knocked off RV Western Kentucky on the road and split the first two game against then-No. 22 LSU.

The 2022 USA Today/NFCA Division I Top 25 Coaches Poll is voted on by 32 NCAA Division I head coaches with one representing each of the NCAA’s Division I Conferences. Records reflect games played through March 27.

Dropped Out: No. 25 Stanford

The 2022 USA Today / NFCA Division I Top 25 Coaches Poll is voted on by 32 NCAA Division I head coaches with one representing each of the NCAA’s Division I Conferences. Records reflect games played through March 27, 2022.