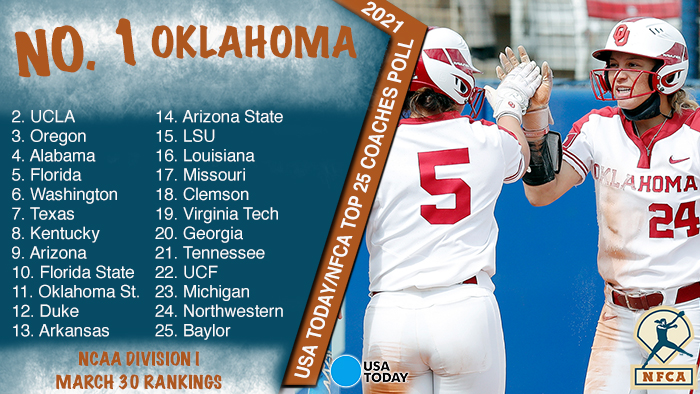 LOUISVILLE, Ky. – Oklahoma is still the unanimous No. 1 and Florida State joined the top 10 in this week’s 2021 USA Today/NFCA Division I Top 25 Coaches Poll. The undefeated Sooners (25-0) swept their Big 12 opening series against Iowa State, while the Seminoles (20-6) rolled to four wins in ACC play at Boston College.

Additionally, the poll welcomes No. 24 Northwestern and No. 25 Baylor. It marks the Wildcats’ (15-1) first ranking this season and the Bears (21-5) are back after being in the first three polls of 2021.

After holding off a seventh-inning rally by the Cyclones for a 9-7 game-one win in Ames, Iowa, OU captured a pair of run-rule victories to complete the sweep.

No. 3 Oregon, No. 7 Texas and No. 9 Arizona joined Oklahoma and FSU with unblemished records last week. The Ducks (23-1) and Longhorns (24-3) posted three and four non-conference wins, respectively, while the Wildcats (18-5) took all four contests from Pac-12 foe Oregon State, three of which counted towards league standings.

No. 4 Alabama split the first two matchups at then-No. 7 Kentucky and also earned a mid-week win over North Alabama. Along with the split, the Wildcats (24-4) dropped a mid-week non-conference affair at Western Kentucky.

The 2021 USA Today/NFCA Division I Top 25 Poll is voted on by 32 NCAA Division I head coaches, one representing each conference. Records reflect games played through March 28. Programs not competing in 2021 will not be eligible for ranking consideration.

The 2021 USA Today / NFCA Division I Top 25 Coaches Poll is voted on by 32 NCAA Division I head coaches with one representing each of the NCAA’s Division I Conferences. Records reflect games played through March 28.