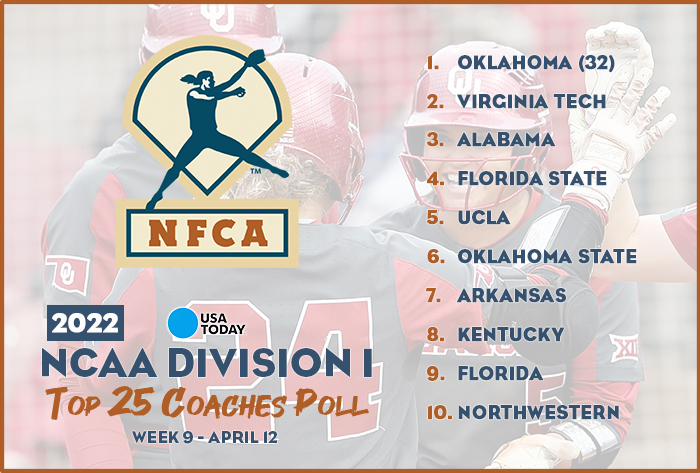 LOUISVILLE, Ky. – Off to a NCAA DI-record 36-0 start, Oklahoma continues its strong hold on the No. 1 spot in this week’s 2022 USA Today/NFCA Division I Top 25 Coaches Poll. The Sooners, who picked up four run-rule victories last week, broke the previous record of 35-0 held by three other programs, the last being Oregon in 2017.

The record-setting victory came in style as Jordy Bahl and Nicole May combined on a no-hitter in a 21-0 triumph at Texas Tech, completing a three-game Big 12 sweep of the Red Raiders. Along with a 9-0 mid-week win over Tulsa, OU blanked its opposition 52-0 last week. Along with Oregon, the previous record holders were Canisius (1993) and UCLA (1999 & 2001).

Following an ACC-series win at then-No. 2 Florida State, Virginia Tech climbed one more spot to No. 2. It marked the second straight series win on the road against a nationally-ranked program from the Sunshine State. The Hokies (29-5) knocked off the Seminoles (37-4) in the first two games, including a wild 23-9 game two win, setting a single-game record for runs.

Alabama elevated to No. 3 with three Southeastern Conference (SEC) wins last week. After claiming an SEC series with a triumph over then-No. 15 Georgia on April 4, the Crimson Tide (33-5) opened with two league victories at then-No. 7 Florida.

No. 5 UCLA also dropped two spots in the rankings after it was defeated in a Pac-12 series by Stanford, which makes its first top-25 appearance since April 1, 2014 (24th). Following a game-one extra-inning win by the Bruins (32-5), the newly-ranked Cardinal (26-10) twirled consecutive 1-0 shutouts to earn their first series win over UCLA since 2013. It also snapped the Bruins’ 25-game win streak and marked the first two times this season they were held without a run.

In the latter half of the top 10, No. 6 Oklahoma State (31-7) and No. 8 Kentucky (27-9) remained in their rankings after taking their respective conference series, while Arkansas (28-7) moved up three positions after it swept then-No. 17 Auburn. The Gators dipped to No. 9 and Northwestern fell one spot to No. 10.

Missouri dropped out of the poll for the first time since the first regular-season rankings of 2020.

The 2022 USA Today/NFCA Division I Top 25 Coaches Poll is voted on by 32 NCAA Division I head coaches with one representing each of the NCAA’s Division I Conferences. Records reflect games played through April 10.

Dropped Out: No. 24 Missouri

The 2022 USA Today / NFCA Division I Top 25 Coaches Poll is voted on by 32 NCAA Division I head coaches with one representing each of the NCAA’s Division I Conferences. Records reflect games played through April 10, 2022.