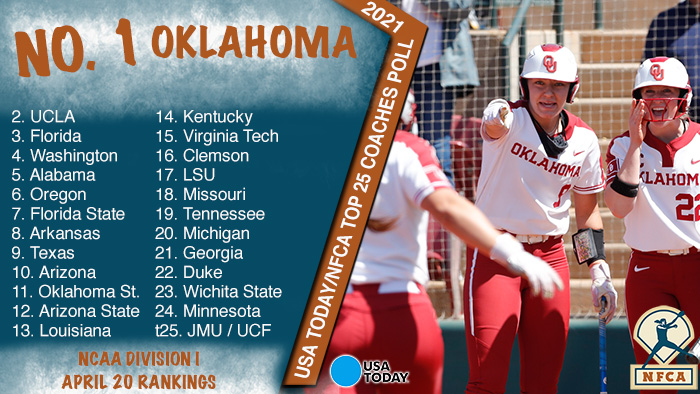 LOUISVILLE, Ky. – Oklahoma, coming off a convincing three-game sweep of then-No. 7 Texas, entered its eighth straight week at No. 1 in the 2021 USA Today/NFCA Division I Top 25 Coaches Poll. With the trifecta of run-rule victories, the Sooners (33-0) extended their win streak to 40 games.

Unanimous No. 2 UCLA (25-2) posted a three-game sweep of Oregon State. Four different Bruin pitchers, highlighted by a Rachel Garcia no-hitter, held the Beavers to no runs and just three hits over 21 innings.

No. 3 Florida and No. 4 Washington each won their respective conference series and moved up two positions in the rankings, while the teams that they defeated, No. 5 Alabama and No. 6 Oregon, dropped two spots. The Gators (32-6) bounced back from a mid-week defeat to then-No. 23 UCF and took two-of-three from the Crimson Tide (33-7) in Tuscaloosa. The Huskies (34-6) captured three-of-four from the Ducks (28-8) at home, taking all three Pac-12 contests.

Florida State and Arkansas swept through conference play last weekend. The Seminoles (31-6) won their fourth straight Atlantic Conference Coast series with four triumphs at Syracuse, extending their win streak to 15 games. The Razorbacks knocked off then-No. 20 Georgia with three victories over the Bulldogs (27-11) in Athens.

No. 9 Texas and No. 10 Arizona dipped two spots each after falling in their respective league series on the road. The Longhorns were defeated by the top-ranked Sooners, while the Wildcats (27-8) dropped three-of-four to the new-No. 12 ranked Arizona State Sun Devils (28-11).

Making an appearance for the first time in 2021 is James Madison, tying UCF at No. 25. The Dukes (22-1) pushed their win streak to 12 with a Colonial Athletic Association sweep of Elon last week.

Highlighting this upcoming week’s schedule is a top-four Pac-12 matchup in Los Angeles, featuring the second-ranked Bruins and the fourth-ranked Huskies. In non-conference head-to-heads, No. 1 Oklahoma travels east today, April 20, for a doubleheader at No. 21 Georgia, and No. 13 Louisiana heads to Tuscaloosa this weekend for two contests against No. 5 Alabama.

The 2021 USA Today/NFCA Division I Top 25 Poll is voted on by 32 NCAA Division I head coaches, one representing each conference. Records reflect games played through April 18. Programs not competing in 2021 will not be eligible for ranking consideration.

The 2021 USA Today / NFCA Division I Top 25 Coaches Poll is voted on by 32 NCAA Division I head coaches with one representing each of the NCAA’s Division I Conferences. Records reflect games played through April 18.