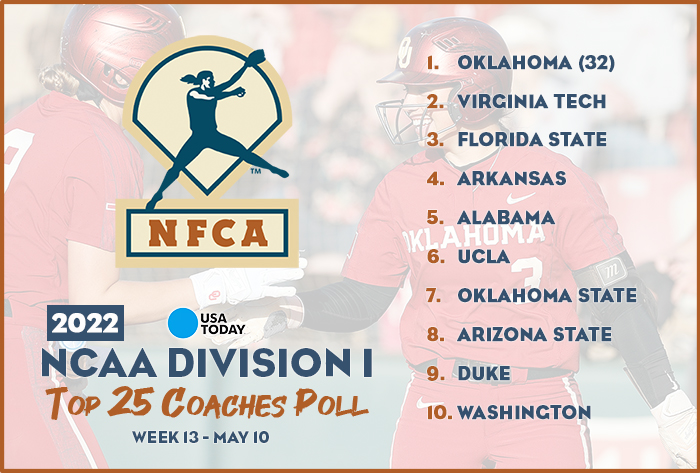 LOUISVILLE, Ky. – While Oklahoma enters its 27th consecutive week at No. 1, Arizona State and Duke cracked the top 10 for the first time this season in this week’s 2022 USA Today/NFCA Division I Top 25 Coaches Poll. The Sooners (48-1) swept No. 7 Oklahoma State in Bedlam and captured their 10th consecutive Big 12 regular-season title.

Virginia Tech (39-6)  and Florida State held on to their No. 2 and 3 rankings. The Hokies won a mid-week contest against Liberty, while the Seminoles knocked off then-No. 10 Florida and swept North Carolina State on the road to finish out Atlantic Coast Conference (ACC) play. The duo will be the No. 1 and 3 seeds at this week’s ACC Tournament hosted by Pitt.

Arkansas (41-9), which took two-of-three from Texas A&M on the road, moved up to No. 4 and will be the top overall seed at the Southeastern Conference Tournament (SEC) hosted by Florida.

The Sun Devils (37-8) captured its first series over the Bruins since 2015 taking games one (6-1) and three (6-3). With three games left at No. 10 Washington,  first-place ASU enters the final week of the regular season holding  a two-game cushion over UCLA.

With Duke’s surge to No. 9, the ACC, along with the Pac-12 have three top-10 programs entering the final week before NCAA Regionals. The Blue Devils (40-7) won their final four games of the regular season, defeating Campbell and sweeping Pitt to earn their first 40-win season in program history, surpassing the 39-win mark set a season ago.

Louisiana made its way back into the rankings, coming in a No. 25. The Ragin’ Cajuns (41-11) swept ULM in their final Sun Belt series, extending their national-leading total of consecutive conference series won to 73 straight. The streak started in March 2013. It also marked their 23rd straight 40-win season.

Arizona dipped out of the poll this week after suffering a pair of losses against California. The Wildcats fall out of the NFCA rankings for the first time since the 2014 preseason poll.

The 2022 USA Today/NFCA Division I Top 25 Coaches Poll is voted on by 32 NCAA Division I head coaches with one representing each of the NCAA’s Division I Conferences. Records reflect games played through May 8.

Dropped Out: No. 25 Arizona

The 2022 USA Today / NFCA Division I Top 25 Coaches Poll is voted on by 32 NCAA Division I head coaches with one representing each of the NCAA’s Division I Conferences. Records reflect games played through May 8, 2022.