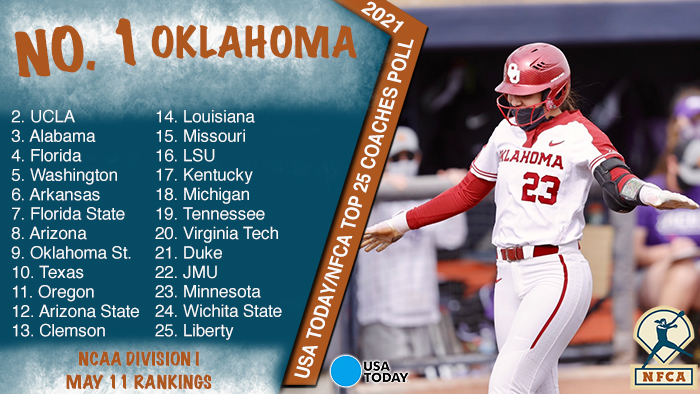 LOUISVILLE, Ky. – Oklahoma kept its hold on No. 1 and the top five remained the same in this week’s 2021 USA Today/NFCA Division I Top 25 Coaches Poll. Ranked first for the 11th straight week, the Sooners, who captured Bedlam with a 2-1 series win over No. 9 Oklahoma State, received 25 first-place votes and 793 points.

With the Big 12 regular season on the line, OU (42-2) rebounded from a 6-4 game-one defeat in Stillwater with 6-4 and 11-8 triumphs to wrap up its ninth consecutive regular-season title. The Sooners also earned a mid-week win over then-No. 25 Wichita State. The series-opening victory by the Cowgirls (40-8) was their first over the Sooners since 2011 and it also handed OU its first Big 12 regular season loss since 2017.

No. 4 Florida closed at the regular season with a SEC series sweep of Texas A&M, which included a pair of comeback victories over the Aggies. The Gators (40-8) clinched their ninth regular-season title, sharing it with No. 6 Arkansas, and will be the No. 1 seed at the SEC Tournament. UF was the only program to win every conference series in 2021.

Fifth-ranked Washington collected four wins over Utah in Pac-12 play. No. 7 and No. 8 Arizona each dropped on spot. The Seminoles (38-9-1) took two-of-three from Pitt in an Atlantic Coast Conference finale, while the Wildcats (40-8) split their four-game set with then-No. 12 Oregon on the road.

No. 10 Texas returned to the top-10, blanking Baylor in a three-game Big 12 sweep of the Bears.

Liberty makes its first-ever appearance in the rankings at No. 25. The Flames (39-13) won the ASUN North Division title and reached the tournament semifinals taking two-of-three from Lipscomb in the quarterfinal round.

The 2021 USA Today/NFCA Division I Top 25 Poll is voted on by 32 NCAA Division I head coaches, one representing each conference. Records reflect games played through May 9. Programs not competing in 2021 will not be eligible for ranking consideration.

Dropped Out: No. 22 Georgia

The 2021 USA Today / NFCA Division I Top 25 Coaches Poll is voted on by 32 NCAA Division I head coaches with one representing each of the NCAA’s Division I Conferences. Records reflect games played through May 9.