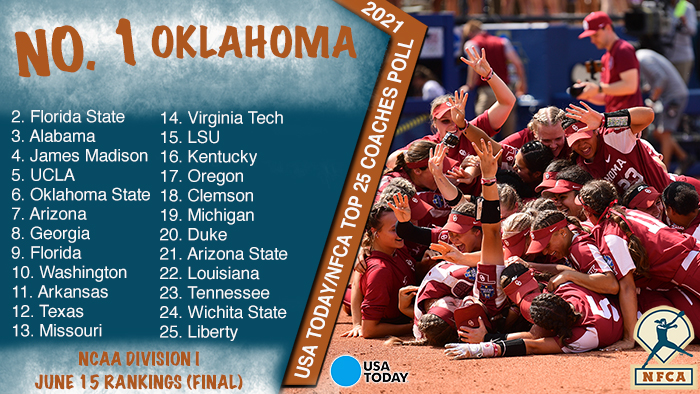 LOUISVILLE, Ky. – Oklahoma, battling out of the elimination bracket, won its fifth national title and is the unanimous No. 1 team in the final 2021 USA Today/NFCA Division I Top 25 Coaches Poll. Ranked first for the final 13 weeks, the Sooners (56-4) were the unanimous top choice for the 10th time this season.

After posting a 5-0 mark during regionals and super regionals, OU dropped its opener to unseeded James Madison, 4-3 in eight innings. The Sooners would go on to win four straight elimination games against unseeded Georgia (8-0), second-seeded UCLA (10-3) and two versus the Dukes (6-3, 7-1). The Sooners once again would drop the opener, this time in the Championship Series, against 10th-seeded Florida State. After falling behind 2-0 in game two, the Sooners rallied for a 6-2 win and then captured the title with a 5-1 victory.

National runner-up Florida State came in at No. 2. Like the Sooners, the Seminoles (49-13-1) dropped their WCWS opener and battled out of the elimination bracket to reach their second Championship Series in three years. FSU knocked off the 11th-seeded Arizona Wildcats, fifth-seeded Oklahoma State and No. 3 overall seed Alabama twice.

National semifinalists Alabama and James Madison clocked in at No. 3 and No. 4. The Tide (52-9) cruised through regionals, posting three shutouts, the final two coming against then-No. 13 Clemson. In a pair of close contests, Alabama swept Southeastern Conference foe Kentucky (4-3, 4-1)  in super regionals. Highlighted by Montana Fouts’ perfect game against UCLA, Alabama won its first two games at the WCWS for the fourth time, before falling to FSU twice.

The Dukes (41-4) made one of the most impressive runs of the season, which culminated as being the first-ever unseeded program to win the first two games (Oklahoma and Oklahoma State) at the WCWS and reach the semifinals. As the No. 3 regional seed, JMU swept through the Knoxville Regional with wins over No. 9 national seed Tennessee and Liberty (twice). They continued by winning games one and three versus No. 8 overall seed Missouri at the Columbia Super Regional.

WCWS participants UCLA, Oklahoma State, Arizona and Georgia come in at No. 5 through No. 8 with Florida and Washington rounding out the top 10. The Wildcats (41-15) and Bulldogs (34-23) posted perfect 5-0 runs heading into the WCWS, both winning their super regionals on the road against No. 6 seed Arkansas and No. 4 seed Florida, respectively.

The Bruins (47-7) and Cowgirls (48-12) swept their respective regionals, but were taken to the limit at home during super regionals. UCLA dropped its opener to unseeded Virginia Tech, but battled back to win games two and three, while Oklahoma State won a tightly-contested series against No. 12 seed Texas. The Cowgirls won the opener, and after falling in game two, rebounded with a 2-0 shutout in the rubber game.

Additionally, No. 18 Clemson, 20 Duke, No. 24 Wichita State and No. 25 Liberty are nationally ranked in the final poll of the season for the first time in program history. For the Tigers (44-8) and Blue Devils (44-12), it comes in their first and third full season of collegiate softball, respectively.

The 2021 USA Today / NFCA Division I Top 25 Coaches Poll is voted on by 32 NCAA Division I head coaches with one representing each of the NCAA’s Division I Conferences. Records reflect games played June 10. Programs that did not compete in 2021 were not eligible for ranking consideration.

Dropped Out: No. 24 Minnesota

The 2021 USA Today / NFCA Division I Top 25 Coaches Poll is voted on by 32 NCAA Division I head coaches with one representing each of the NCAA’s Division I Conferences. Records reflect games played June 10.

*Programs not competing in 2021 were not be eligible for ranking consideration.