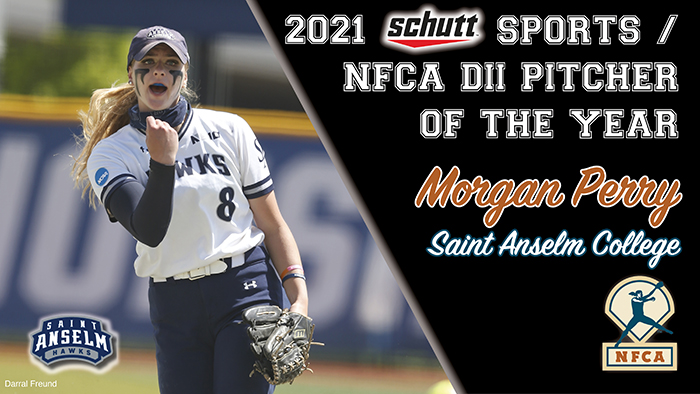 McBroom was a catalyst for the Lady Buffs’ run to a 2021 DII national championship. The first-team All-America catcher started every game behind the plate for WT and had a career year offensively. McBroom, who captured the Diamond Sports/NFCA Catcher of the Year, hit a career best .426 with 80 hits, 13 doubles, seven home runs, 37 RBI and a .691 slugging percentage.

From the leadoff spot, McBroom, the first Player or Pitcher of the Year from the Lone Star Conference and South Central Region, topped the team and the NCAA with 71 runs scored, eight triples and 35 stolen bases to go along with a .478 on-base percentage. Additionally, her 80 hits ranked second in the NCAA behind teammate Ruby Salzman and the 35 stolen bases are one more than McBroom recorded in her career entering 2021.

Perry, a 2021 NFCA First-Team All-American, was pivotal leading the Hawks to an NCAA East Region title and their second appearance at the DII National Championship in three seasons. The right-handed hurler finished the 2021 campaign 20-3 with a 1.01 ERA, 12 shutouts and 222 strikeouts to just 38 walks over 138.2 innings of work. In 23 appearances, she held her opposition to a .164 batting average and surrendered just six home runs in 550 plate appearances.

The award, voted on by the NFCA DII All-America Committee, was created in 2015 to honor the outstanding athletic achievements among softball student-athletes throughout NCAA Division II. In 2019, the Association expanded the award to include a Player and Pitcher of the Year. To be eligible, student-athletes must be nominated by their member head coach.

*The NFCA began awarding a Player and Pitcher of the Year in 2019.