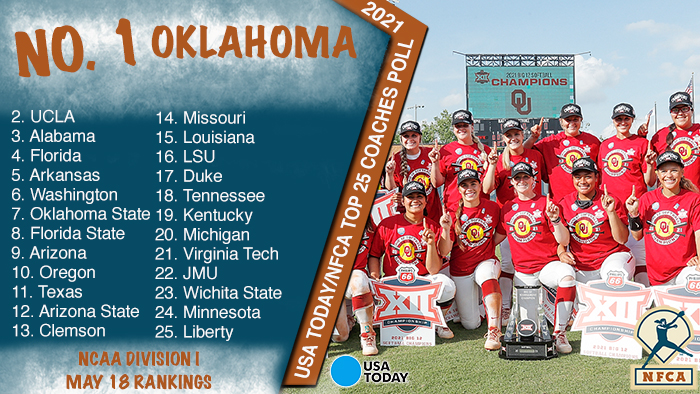 LOUISVILLE, Ky. – Oklahoma won its seventh Big 12 Tournament title and enters the postseason as the No. 1 team in the final 2021 USA Today/NFCA Division I Top 25 Coaches Poll of the regular season. The final NFCA poll will be released on Tuesday, June 15, following the conclusion of the Women’s College World Series.

Ranked first for the 12th straight week, the Sooners (45-2) were the unanimous top choice for the ninth time this season. OU, which earned the top seed for the 2021 NCAA Division I Softball, Championship cruised to three more wins and are tied with No. 3 Alabama for the most victories in NCAA Division I at 45. It marked the fourth straight season the Sooners have won the Big 12’s regular-season and tournament crowns.

The third-ranked Crimson Tide (45-7) hosted and won the SEC Tournament Championship, knocking off then-No. 17 Kentucky, then-No. 19 Tennessee and No. 4 Florida in route to their sixth tournament title.

Oklahoma and Alabama, the NCAA’s third overall seed, will host respective regionals this weekend. The SEC Tournament runner-up Gators (42-9) earned the NCAA’s fourth overall seed. In all, every program in the Top 25, and the 10 teams receiving votes, earned a bid into this year’s NCAA Championship.

No. 2 UCLA wrapped ups its regular season with a 3-1 Pac-12 series victory over then-No. 7 Arizona. With a 6-2 game-two victory over the Wildcats, the Bruins (41-4) captured their 11th league title and will be the NCAA’s No. 2 overall seed.

Arkansas finished at No. 5 and Washington No. 6, while Oklahoma State moved into the seventh spot. The Razorbacks (40-9), Huskies (41-11) and the Big 12 runner-up Cowgirls (42-9) earned the sixth, 16th and fifth overall seeds, respectively.

No. 8 Florida State, which fell in the Atlantic Coast Conference semifinals to eventual champion Duke, and No. 9 Arizona (36-13) each dropped a position. No. 10 Oregon (37-15), following a four-game sweep of California, made its return to the top 10.

The previously-mentioned Blue Devils (42-10) knocked off host Louisville, the then-seventh ranked Seminoles (39-10-1) and No. 13 Clemson (42-6) for their first ACC tournament championship. Duke jumped up four spots to No. 17 this week and will be on the road in Athens, Ga. as the NCAA’s No. 13 overall seed.

NCAA regionals will be held May 20-23 on 16 campus sites. At each campus site, a four-team, double-elimination tournament will be conducted, and the 16 winning teams advance to the super regionals.

The 2021 USA Today/NFCA Division I Top 25 Poll is voted on by 32 NCAA Division I head coaches, one representing each conference. Records reflect games played through May 16. Programs not competing in 2021 will not be eligible for ranking consideration.

The 2021 USA Today / NFCA Division I Top 25 Coaches Poll is voted on by 32 NCAA Division I head coaches with one representing each of the NCAA’s Division I Conferences. Records reflect games played through May 16.