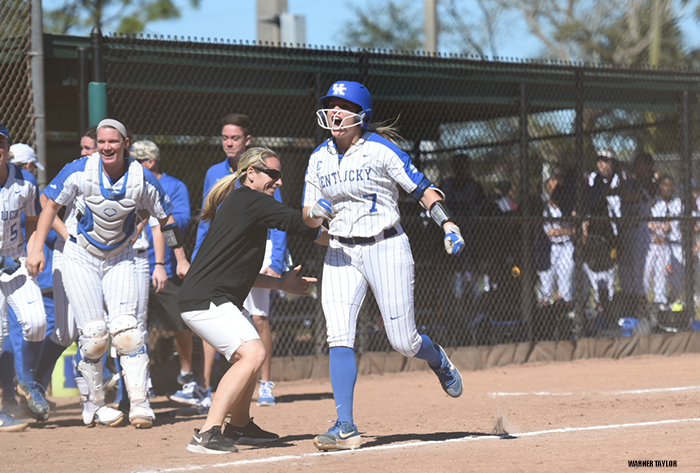 CLEARWATER, Fla. – Illinois, Kentucky, Missouri, and Mississippi State head into the final day undefeated at the NFCA Division I Leadoff Classic presented by Rawlings at the Eddie C. Moore Complex. The U.S. National Women’s Team, as part of its “Stand Beside Her” Tour presented by Major League Baseball, continued to be part of the weekend, picking up wins over Baylor and No. 14 Kentucky.

Day two was highlighted by several grand slams, including a walk-off, along with an inside-the-park home run and extra-inning contests.

The Tigers pushed their record to 4-0, while the Illini, Wildcats, Bulldogs improved to 3-0. Mizzou powered its way to both wins, launching five home runs, including four in a 9-1 triumph over Baylor. Against the Bears, the Tigers hit three solo shots in the first two innings, before Cayla Kessinger smacked a grand slam to break open a close contest. Kessinger came up clutch in a 7-4 eight-inning win over No. 8 Minnesota, recording the game-winning two-run double in the top of the eighth.

Illinois earned a pair of close victories, defeating No. 21 Ole Miss, 3-1 and South Alabama, 5-4. The Illini scored three runs in the second and held on for a 3-1 win over No. 21 Ole Miss. The Illini got a 3-for-3 outing from Avrey Steiner. Steiner and Kailee Powell each drove in a run. In its nightcap, Illinois erased a 3-1 deficit with a three-run third and held on for a 5-4 win. Bella Loy was 3-for-4 with two RBI.

The Wildcats won their lone collegiate contest in highlight-reel fashion. With the score deadlocked at 2-2 in the bottom of the eighth, UK had the bases loaded and one out. Starting pitcher Autumn Humes stepped up to the plate and roped a walk-off grand slam to left to give the Wildcats and herself the victory.

Mississippi State captured a pair of triumphs, defeating Liberty, 9-2, and edging Louisville, 3-2, in eight innings. The Bulldogs scored nine runs over the fourth, fifth and sixth innings, capped off by a Fa Leilua grand slam. In their second contest, Anna Kate Segars scooted home with the winning run on a fielder’s choice grounder in the top of the eighth for a 3-2 Mississippi State win.

For all the results, box scores and other tournament information visit the Tournament Central.

Auburn and Notre Dame took home two wins and improved to 3-1 and 2-2, respectively. The Tigers edged Liberty (5-3) and Texas State (3-1), while the Fighting Irish topped Missouri State (16-0) and Ole Miss (7-5). Trailing 3-0 in the bottom of the fourth, Auburn’s Madison Koepke tied the game with a three-run homer and Justus Perry followed with a thrilling inside-the-park home run after the Flames’ right fielder dove and the ball rolled all the way to the fence, allowing Perry to scamper home with the winning run.

Notre Dame picked up its first win of 2020 as it registered the tournament high in runs on 13 hits, three off the bat of Abby Sweet and two each by Quinn Biggio and Alexis Holloway. Sweet drove in four runs and scored three more, while Biggio doubled and recorded two RBI and Holloway doubled and score twice. Holloway and Morgan Ryan combined on a one-hit shutout. Against the Rebels, the Irish rebounded from a 4-0 first-inning hole to pull out the two-run win. A four-run fifth was the difference, as a two-run single by Katie Marino was sandwiched around two RBI groundouts.

Also picking up wins on Saturday were Texas State, 7-3 over Louisville, North Carolina State, 7-5 over Missouri State and Minnesota, 10-0 against South Alabama.

The U.S. National Team continued to win big, knocking off Baylor, 9-1 and Kentucky 7-0.

Action concludes tomorrow with eight contests. Baylor and Missouri State kick things off at 9:00 a.m.  The Red, White and Blue wrap up their five-game set against Texas State at noon. You can purchase tickets HERE. If you are unable to make it, you can watch the action for free, as all games are livestreamed by Sportzcast on the NFCA’s YouTube channel (NFCAorg).