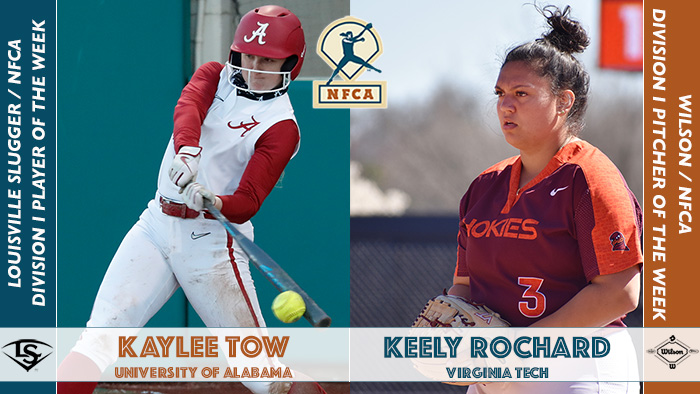 LOUISVILLE, Ky. –Alabama’s Kaylee Tow and Virginia Tech’s Keely Rochard were selected Louisville Slugger/NFCA Player of the Week and Wilson/NFCA Pitcher of the Week for Division I, respectively. The duo was honored for its play during the week of Feb. 15-21. It marked the first recognition for Tow and the fourth for Rochard.

Tow, who hails from Madisonville, Ky., batted a robust .786 (11-for-14) with two doubles, a home run, nine RBI and seven runs over the course of four games last weekend. She recorded four multi-hit games, including a season-best three against RV Liberty and back-to-back contests against then-No. 8 LSU. She slugged 1.143 and reached base at an .800 clip. In a 13-5 win over the Tigers, Tow scored three times and drove in a career-high five runs helping No. 4 Alabama to its highest run total in program history against the Tigers.

Rochard posted complete-game wins over then-No. 13 Florida State (twice) and RV Clemson. The junior righty went 3-1 last week with a 0.91 ERA and 24 strikeouts in 23 innings of work. Bouncing back from a game-one defeat against the Tigers (4 IP, 6R, 1 ER), Rochard held Clemson to a run on three hits with four punchouts in a 4-1 victory. She surrendered a run on three hits with seven strikeout and no free passes in game-two win against the Seminoles. Rochard capped off the weekend with a one-hit shutout of FSU give the 14th-ranked Hokies an early Atlantic Coach Conference series win. The Williamsburg, Va. native struck out nine Seminoles in the 6-0 triumph.