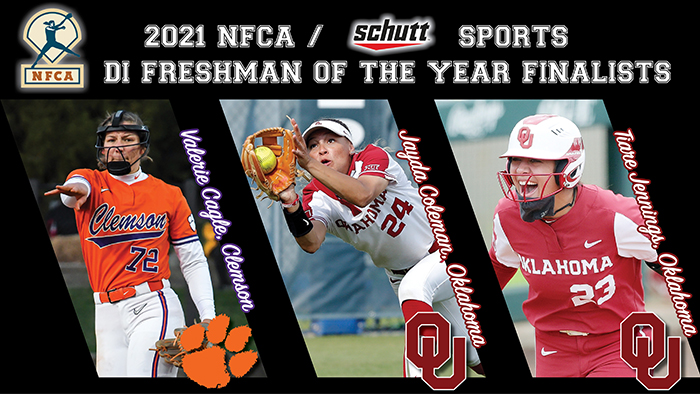 LOUISVILLE, Ky. – Clemson’s Valerie Cagle and the Oklahoma duo of Jayda Coleman and Tiare Jennings are the three finalists for the 2021 NFCA / Schutt Sports Division I National Freshman of the Year, the Association revealed on Thursday afternoon. It marks the second time (2016 - Amanda Lorenz & Kelly Barnhill - Florida) two student-athletes from the same program are in the top three.

The winner, which is voted on by the Association’s Division I All-America Committee, will be announced live during a virtual ceremony on June 1 prior to the start of the Women’s College World Series. Co-hosted with USA Softball, the ceremony, which includes the USA Softball Collegiate Player of the Year reveal, will take place at 9 p.m. ET / 8 p.m. CT on NFCA.org. 2016 Freshman of the Year Amanda Lorenz, who is a volunteer assistant at her alma mater Florida, will be the NFCA’s special guest speaker on Tuesday night.

Cagle, a first team NFCA All-Region selection, was the first player in league history to be named league Player and Freshman of the Year in the same season. A top-10 finalist for USA Softball Collegiate Player of the Year, Cagle currently is tied for the ACC lead in wins (28) and saves (5), is second in ERA (1.16), innings pitched (216.2), shutouts (11) and batters struck out (267). Her wins, saves and shutouts rank third, fifth and eighth in the NCAA, respectively, while her ERA and strikeouts are 11th best. In the batter’s box, she leads the ACC in slugging percentage (.821) and is tied for first in home runs (17) and RBI (45), third in on-base percentage (.492), and is tied for fourth in doubles (12). Cagle homered and picked up the win in the same game eight times and also recorded a program-record 23- game hitting streak in 2021. Offensively, she ranks top-25 nationally in home runs (t-22nd) and slugging (23rd).

Coleman, named to the NFCA All-Region and All-Big 12 first teams, has been a versatile player for the Sooners, starting every game in the outfield or at first base. She is batting .478 to go with 46 RBI, 66 runs scored, eight home runs and 19 stolen bases. She holds a team-best .584 on-base percentage, drawing 31 walks. Her on-base percentage and stolen bases are tops in the Big 12 and she is second behind her teammate Jennings in runs scored and batting average. The native of The Colony, Texas, registered a 19-game hit streak earlier this season. Coleman ranks in the top 10 nationally in runs per game (3rd / 1.34), doubles (4th) on-base percentage (5th) and batting average (8th).

Jennings, the Big 12 Freshman of the Year and top-10 finalist for USA Softball Collegiate Player of the Year, leads the Big 12 with a .488 average, 80 hits, 71 runs scored, 84 RBI and 20 doubles and is second to her teammate Jocelyn Alo with 25 home runs and a 1.067 slugging percentage. Homering three times in her first collegiate contest (matching a program record), Jennings has left the yard in 21 different games this season.  Starting every contest of the season at second or third base, Jennings holds a .969 fielding percentage with 54 putouts and 41 assists to just three errors. Nationally, Jennings ranks top-10 in RBI (1st), runs per game (1st / 1.42), RBI per game (2nd), slugging (2nd), home runs (t-2nd), home runs per game (t-2nd) and batting average (4th), hits (5th).

The NFCA / Schutt Sports Division I National Freshman of the Year award was created in 2014 to honor outstanding athletic achievement among Division I freshmen softball student-athletes. To be eligible, student-athletes must be nominated by their member head coach. With the cancellation of last year’s season due to COVID-19, eligible candidates hail from the 2020 and 2021 freshman classes. In 2021, the NFCA will award National Freshman of the Year honors to a student-athlete from NCAA DI, NCAA DII, NCAA DIII and NAIA. For more information about all NFCA Awards, visit nfca.org.