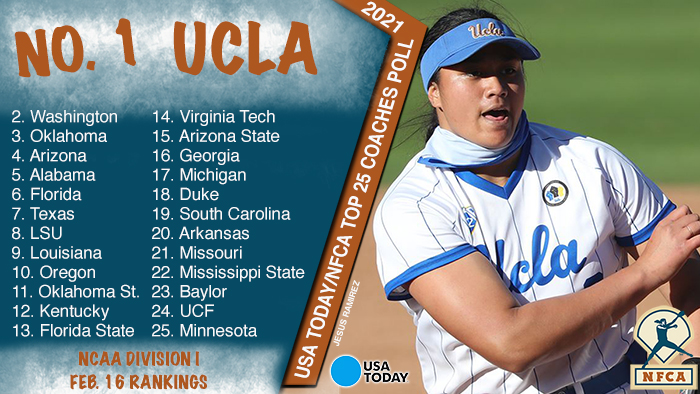 LOUISVILLE, Ky. – Following an opening weekend during which Mother Nature did not cooperate, UCLA remained atop and Duke shot up the ranks of this week’s 2021 USA Today/NFCA Division I Top 25 Coaches Poll. The Bruins (1-0) captured 31 first-place votes and 799 points, while the Blue Devils jolted to No. 18 after a 4-0 start to their 2021 campaign.

UCLA topped then-RV Fresno State, 7-0, to open its season, but had its final two contests canceled due to COVID-related protocols within the Cal Poly program. Fresh off its first-ever NFCA top-25 ranking in the preseason poll (25th), Duke made the most of its trip to Baton Rouge with four wins, including an 8-4 triumph over Tiger Classic host and then-No. 5 LSU. The Blue Devils also defeated Central Arkansas twice and McNeese State.

Oklahoma’s offense showed no signs of a 300-plus day layoff as it pushed across 70 runs over a four-game stretch at the Miner Invitational hosted by UTEP. Moving into the No. 3 spot this week, the Sooners (4-0) launched an NCAA single-game record 13 home runs in a 29-0 victory over host UTEP. Following 9-0 and 11-0 wins over Abilene Christian, OU hit eight more long balls in a 21-2 triumph over the Miners. For the weekend, the Sooners blasted 24 home runs and registered 69 hits.

A season-opening tournament hosted by No. 7 Texas and featuring No. 5 Alabama and No. 4 Arizona was canceled due to wintery conditions in the Lone Star state. No. 9 Louisiana joined the Longhorns and Wildcats as top-10 programs who were unable to start their 2021 campaigns.

The Crimson Tide rose to the No. 5 spot after they found some last-minute opponents. Alabama’s arms tossed four shutouts and surrendered a total of six hits over 24 innings in victories over Alabama State (10-0), RV Notre Dame (10-0) and Louisville (5-0, 4-0).

No teams moved in or out of the poll, but there was some shuffling amongst teams 12 through 25.

The 2021 USA Today/NFCA Division I Top 25 Poll is voted on by 32 NCAA Division I head coaches, one representing each conference. Records reflect games played through Feb. 14.

The 2021 USA Today / NFCA Division I Top 25 Coaches Poll is voted on by 32 NCAA Division I head coaches with one representing each of the NCAA’s Division I Conferences. Records reflect games played through Feb. 14.