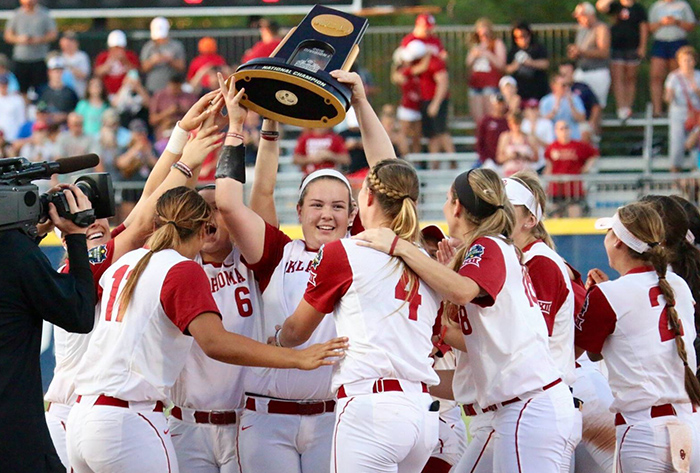 OKLAHOMA CITY – Oklahoma scored two runs in the first and Paige Parker, along with the Sooner defense, did the rest as it defeated Auburn, 2-1 to claim the 2016 National Championship in the “winner-take-all”  game at Women’s College World Series on Wednesday evening at ASA Hall of Fame Stadium.

It’s the third title for the Sooners (57-8), who join Arizona and UCLA as the only programs to win more than two Division I national championships. OU head coach Patty Gasso becomes the fourth DI head coach to win three or more national titles.

Parker, the tournament MVP, allowed a run on five hits with five strikeouts and one walk, finishing the season with a NCAA-best 38 victories (38-3).

Oklahoma took advantage of two Emily Carosone errors to score the only runs it would need in the bottom of the first. After a miscue on a hit-and-run, a fake throw to first got away from Carosone, which allowed Caleigh Clifton to scoot home with the first run. Fale Aviu legged out an infield RBI single with two outs for the second straight game and Shay Knighten crossed the dish for a 2-0 Sooner lead.

The Tigers had a chance to get on the board in the second and the third innings, but could not get the big hit. After a pair of leadoff singles in the second, Paige Parker induced a come backer and fanned the next two batters to get out the jam. An inning later, Auburn loaded the bases, but Parker settled down to strike out Carosone and then her defense turned a 6-4-3 inning-ending double play.

Jade Rhodes put the Tigers on the board and cut Oklahoma’s lead in half with a leadoff homer to deep left in the fourth inning.  Haley Fagen followed with a walk, but Parker would regroup and retire the final 12 batters, including a 10-pitch battle with Courtney Shea that resulted in a grounder to second for the final out of the game.

Auburn’s Makayla Martin matched Parker in the circle, but was undone by the two unearned runs in the first inning. She went the distance, scattering five hits, striking out one and walking two.