Oklahoma heads into 2019 postseason as unanimous No. 1 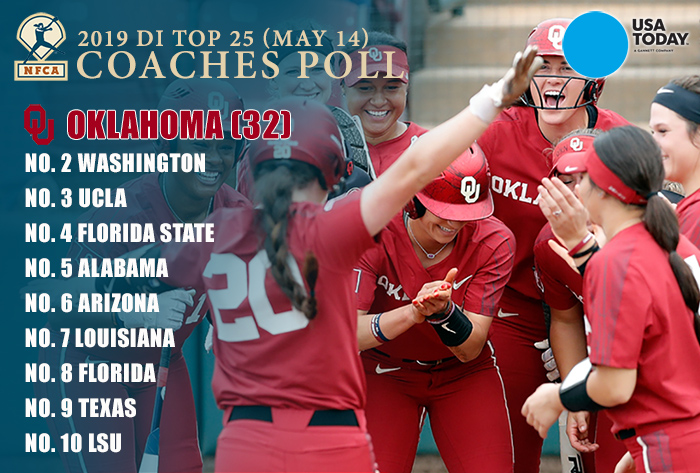 LOUISVILLE, Ky. – Riding a NCAA Division I-record 39-game winning streak into the postseason, Oklahoma continued as the unanimous No. 1 program in the final 2019 USA Today / NFCA Top 25 Coaches Poll of the regular season.

The Sooners (49-2), who received all 32 first-place votes and 800 points, were declared the Big 12’s automatic qualifier after the remainder of 2019 tournament was canceled due to rain and unplayable field conditions. OU received the NCAA’s No. 1 overall seed and will host a regional, featuring UMBC, Notre Dame and RV Wisconsin.

The remainder of the top-10 saw minimal movement as No. 4 Florida State and No. 5 Alabama switched spots as did No. 8 Florida and No. 9 Texas.

No. 2 Washington and No. 3 UCLA shared the Pac-12’s regular-season title with the Bruins (46-5) earning the league’s automatic qualifier because of their early-season sweep of the Huskies. Over the weekend, Washington swept RV Stanford, while UCLA dropped two-of-three to No. 6 Arizona. The Bruins and Huskies received the No. 2 and No. 3 overall seeds for the NCAA Championships.

The Seminoles (51-8), also the NCAA’s No. 4 seed, captured their sixth straight ACC Tournament crown, sweeping the field in Tallahassee. The Crimson Tide (52-7) posted a 2-1 mark in the SEC Tournament, falling in the title game to new-No. 8 Florida. Alabama is the NCAA’s No. 8 seed.

The Gators (44-15) won four games against then-No. 20 South Carolina, No. 10 LSU, No. 24 Auburn and Alabama as the No. 6 seed to capture their second straight SEC Tournament title and fifth overall, earning the NCAA’s No. 5 overall seed.

Louisiana rattled off three victories to win its 15thSun Belt Conference Tournament and reach the 50-win plateau for the first time since 2012. The Ragin’ Cajuns will take a 27-game winning streak into the postseason as they will be part of the Oxford, Miss. Regional hosted by No. 17 Ole Miss (11thseed).

No. 9 Texas dropped both of its games during seeding play of the Big 12 Tournament, while No. 9 LSU exited the SEC tournament following its loss to Florida. The Longhorns (41-14) and Tigers (40-16) will also be the NCAA’s No. 9 and 10 seeds, respectively.

The 2019 USA Today/NFCA Division I Top 25 Poll is voted on by 32 NCAA Division I head coaches, one representing each conference. The records reflect games played through May 12, 2019. The final poll will be released on June 11.

The 2019 USA Today / NFCA Division I Top 25 Coaches Poll is voted on by 32 NCAA Division I head coaches with one representing each of the NCAA’s Division I Conferences. Record reflect games played through May 12, 2019.