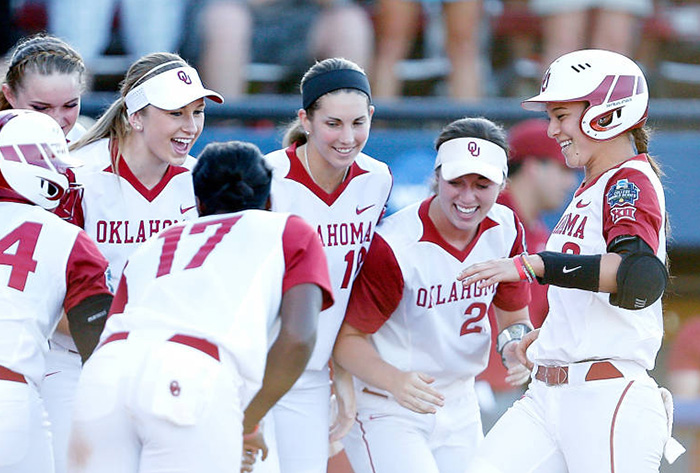 OKLAHOMA CITY — Sydney Romero hit a three-run homer and secured the final out with the tying run on third, as the University of Oklahoma held off Auburn, 3-2, in the opener of the best-of-three NCAA Women’s College World Series championship series on Monday at ASA Hall of Fame Stadium — OGE Energy Field.

Romero’s blast to left center in the third after Kelsey Arnold’s walk proved to be all the offense the two-time (2000, 2013) national champion Sooners needed to win their 31st straight game and improve to 56-7 this season. It was Romero’s fourth homer in her last six games after collecting just six homers over her first 56 games this season.

Paige Parker, who has thrown all 955 pitches of Oklahoma’s postseason, rolled into the final inning before allowing a leadoff walk to Carlee Wallace and a two-run homer to Jade Rhodes as things got interesting. Haley Fagan followed with a single up the middle and, after Madi Gipson struck out swinging, Whitney Jordan reached on a throwing error and continued onto second, while pinch runner Casey McCrackin went first to third.

But a third straight last-inning triumph was not in the cards for Auburn (57-11), as pinch hitter Courtney Shea reached on a fielder’s choice with Shay Knighten cutting down McCrackin at home. Tiffany Howard popped out to Romero to end the threat.

Auburn had several chances earlier in the contest, getting the leadoff batter on in both the fourth and fifth innings, but could not make anything happen against Parker, who allowed four hits, walked three and didn’t get a strikeout until the seventh. The victory improved Parker to 9-0 in the postseason and Oklahoma to 8-0 against Southeastern Conference teams this season.

Lexi Davis was the hard-luck loser, scattering seven hits and retiring the side twice, while facing just four batters in two other innings after pitching just one inning in the postseason prior to Monday’s start.