Race tightens for No. 1 as Florida State holds on to top spot in USA Today/NFCA Division I Coaches Poll 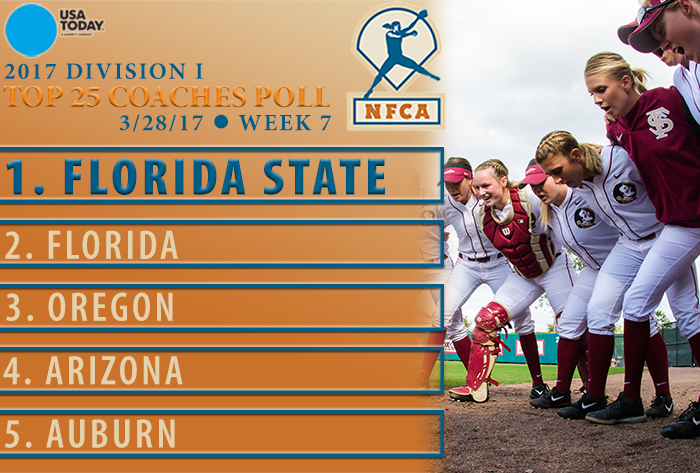 LOUISVILLE, Ky. – The race for the No. 1 has tightened as Florida State holds on to the top spot by the slimmest of margins in this week’s USA Today/NFCA Division I Top 25 Coaches Poll, announced the Association on Tuesday morning. With four programs earning first-place votes, the Seminoles (32-1-1) have a mere 10-point lead over No. 2 Florida.

No. 2 Florida and No. 3 Oregon each earned six first-place votes and 768 and 745 points, respectively. The Gators (29-1) extended their winning streak to 21 games with three victories last week over USF (8-0) and the first two contests against then-No. 4 Auburn (4-3, 7-0). The Ducks (29-0) continued as the lone undefeated squad defeating then-No. 11 Utah on the road in the first two games of their Pac-12 series.

Minnesota swept Nebraska on the road to moved up to No. 6, while Texas A&M stayed put at No. 7. The Huskies (26-6) fell two spots to No. 8. No. 9 Alabama took two-of-three from South Carolina. LSU rejoined the top-10 at No. 10 following four wins, including a three-game home sweep of then-No. 16 Georgia.

After a one-week absence, BYU returns at No. 25, while Cal Poly fell out of the No. 25 position.

The 2017 USA Today/NFCA Division I Top 25 Poll is voted on by 32 NCAA Division I head coaches, one representing each conference.  Records reflect games played through March 26.