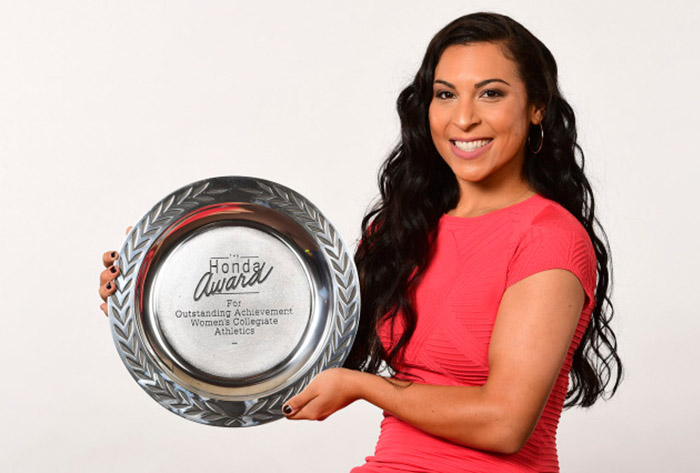 was named a top-three finalist for the 2015-16 Collegiate Woman Athlete of the Year and prestigious Honda Cup during the 40th annual Collegiate Women Sports Awards (CWSA) ceremony Monday evening (June 27) at the Galen Center on the campus of the University of Southern California.

Connecticut's Breanna Stewart (women's basketball) was named the Collegiate Woman Athlete of the Year, while Penn State's Raquel Rodriguez (women's soccer) rounded out the top-three finalists. The top-three finalists were selected by a voting of nearly 1,000 NCAA member schools and the Honda Cup winner was chosen by the Board of Directors of the CWSA program.

Romero, the Honda Sport Award winner for softball, was named the 2016 Schutt Sports/NFCA Division I Player of the Year and USA Softball Collegiate Player of the Year after posting a .451 batting average with 76 runs, 73 hits, 19 home runs and 79 runs batted in. She ranked third nationally with 1.29 runs per game and 1.32 RBI per game and sixth with a .577 on-base percentage and .883 slugging percentage.

A native of Murrieta, California, Romero became the first four-time NFCA All-American in Michigan program history, earning first-team honors each of the last three seasons. She was the inaugural winner of the espnW Softball Player of the Year in 2015, a three-time Big Ten Player of the Year (2013, '14, '16) and twice Michigan's Female Athlete of the Year (2015, '16). She completed her collegiate career as the NCAA record holder in career runs (302) and grand slams (11) and is the only player in NCAA history to record 300 runs, 300 hits and 300 RBI.

The CWSA, celebrating its 40th year, has honored the nation's top NCAA women athletes recognizing superior athletic skills, leadership, academic excellence and eagerness to participate in community service. Since commencing its sponsorship in 1986, Honda has provided more than $3.0 million in institutional grants to the universities of the award winners and nominees to support women's athletics programs at the institutions.