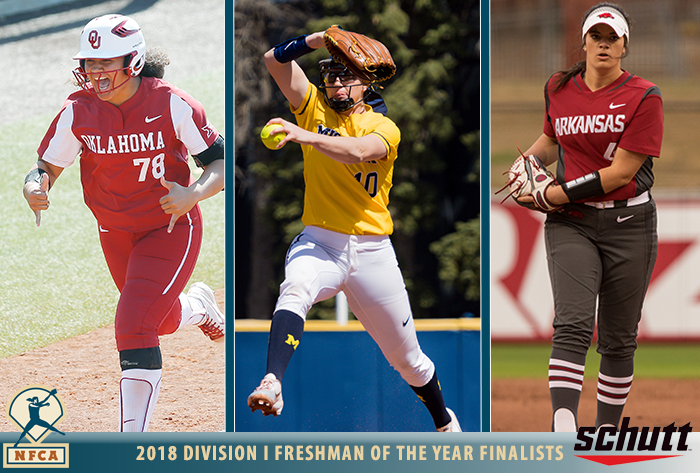 LOUISVILLE, Ky. – Oklahoma’s Jocelyn Alo, Michigan’s Meghan Beaubien and Arkansas’ Mary Haff have been announced as the three finalists for the 2018 Schutt Sports / NFCA Division I National Freshman of the Year award. The winner will be honored on the evening of May 29 at the 2018 NCAA Women’s College World Series banquet in Oklahoma City.

Alo, a first-team All-Central selection, is having a monstrous rookie season at the plate. The utility player leads the NCAA with 26 home runs and is second in long balls per game at 0.46. Additionally, Alo ranks fourth nationally in slugging (.955) and fifth in RBI (67), RBI per game (1.20) and total bases (149). The Big 12 Freshman of the Year finished conference play first in home runs (9), walks (17), runs scored (18), RBI (25), total bases (46) and slugging percentage (.979), while finishing second in on-base percentage (.554). Alo, a product of Hauula, Hawai’i, was named Louisville Slugger/NFCA Division I National Player of the Week for her performance in the Texas Tech series (March 23-25).

Beaubien finished her rookie campaign with a 33-6 record, 1.16 ERA and 266 strikeouts to just 46 walks in 217 innings of work. The southpaw was named the Big Ten’s Freshman and Pitcher of the Year and leads the NCAA in wins, 32 of which came in the regular season- a Wolverine record- and ranks top 15 nationally in ERA (15th), strikeouts (14th), hits allowed per seven innings (5th / 3.26), and shutouts (t-6th / 12). A native of Newport, Mich., Beaubien tossed three no-hitters and combined on a fourth. Additionally, she garnered NFCA First-Team All-Great Lakes Region honors.

Haff has engineered a strong freshman campaign in the circle and played an integral role in Arkansas winning its first NCAA Regional and advancing to this weekend’s Super Regionals. Haff owns a 29-6 mark with a 1.35 ERA and 246 strikeouts in 207.2 innings of work. She has issued just 41 free passes and held her opponents to a .152 batting average. The righty from Winter Haven, Fla. leads the SEC and is second nationally with her program-record 29 triumphs and is tied for 10th in the NCAA with 10 shutouts. Additionally, Haff’s 246 strikeouts are a Razorback freshman program record and second best single-season total.

Alo and Haff will go head-to-head this weekend as the Sooners host the Razorbacks in one of the eight Super Regionals. Alo becomes the third top-three finalist from the back-to-back national champs, while Beaubien and Haff are the first finalists from their respective programs.

In its fifth year, the Schutt Sports / NFCA Division I National Freshman of the Year award was created to honor outstanding athletic achievement among Division I freshmen softball student-athletes. The top three and the finalists are voted on by the NFCA’s Division I All-American Committee, consisting of one coach from each of the Association’s 10 regions.