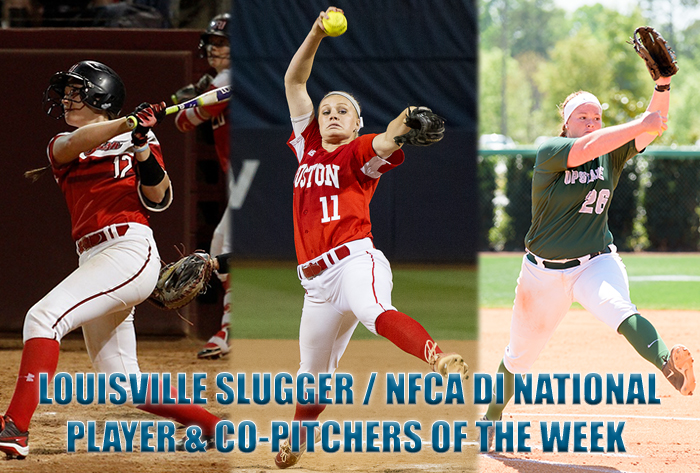 Seneca had a monster week at the plate for the Red Flash. Over a six-game stretch, Seneca hit .500 (8-for-16) with five home runs, 12 RBI, 11 runs scored, a 1.500 slugging percentage and .636 on-base percentage. The sophomore from Plum Pa. homered in the first five games of the week, which included a game-two grand slam versus Bucknell.

“This is an honor,” said Seneca. “Our team has been working really hard. Because our team has had so much success, it’s easy to build off of that and keep working hard. The fact that we’re a really young team and having so much success is something really special. We’re going to do really big things, with so many young starters performing well. We’re on such a high right now, we feel like no one is going to knock us off from it.”

Seneca also contributed one of a NCAA-record (tie) five first-inning long balls for Saint Francis against Bryant. The shortstop and three-time Northeast Conference Player of the Week capped off her streak with her fifth and final dinger, along with four RBI in a win over Mount St. Mary’s.

"Jordan has really stepped it up in practice the past few weeks,” said head coach Jennifer Patrick-Swift. “She always works hard, but she just found another level to work at and its obviously paying off for her and the team.  This is a great accomplishment for her individually, but her success also helped us get some big wins, which is what working hard for the team is all about."

Russell, a native of San Diego, Calif., registered a stellar week in the circle for the Terriers. The senior hurler tossed 22.2 scoreless innings over five appearances, fanning 32 batters and not issuing a free pass to post a 4-0 mark with a save. She tied a career-high with 10 strikeouts in a two-hit shutout of Lafayette and closed out the weekend sweep with six scoreless frames and eight punchouts.

“I’m humbled and honored to be receiving this national award,” Russell said. “It’s truly satisfying to get this recognition now after a tough start to the season. It required a lot of hard work to get to this point, and I couldn’t have done it without the help of my teammates, especially catcher Alex Heinen, who I’ve developed a strong rapport with. I can’t wait to see what the rest of the season has in store for BU Softball.”

In the middle game against the Leopards, Russell earned a save with 2.1 innings of hitless ball and six strikeouts. Russell added 7.1 inning scoreless innings in BU’s mid-week non-conference action to earn two more wins against Bryant and UMass-Lowell. Allowing just 10 hits on the week, she limited her opponents to a .132 batting average.

“I am ecstatic and proud for Mel to receive such a tremendous honor,” head coach Ashley Waters said. “Being named NFCA co-pitcher of the week is a phenomenal acknowledgement.  She has worked incredibly hard mentally and physically to be in this position. This is a wonderful accolade for Mel, for our team and our University. I could not be happier for her.”

McKinnon, a four-time Atlantic-Sun Pitcher of the Week, was nearly flawless in her four appearances, highlighted by a no-hitter. She finished 4-0 with a 0.00 ERA, two shutouts and 25 strikeouts over 25 innings of work. She limited her opposition to a mere six hits and a .074 batting average.

“To be selected for something like this is a huge honor,” said McKinnon. “There are so many girls out there deserving of it every week. I am truly honored. This past week at practice I worked a lot on mechanics, because it is easy to get away from them late in the season. It is easy to relax out there when you have a solid defense behind you. So when I was on the field this weekend I was just having fun and not worrying so much about the outcome.”

“Holly has been an integral part of our season this year,” said head coach Chris Hawkins. “She has won well over 20 games and had an outstanding week this past week. She went 4-0 and threw a no-hitter, and it was awesome. It was a real big boost for our team going into the final stretch of our conference season. I could not be more proud of Holly and what she is trying to accomplish here at our school.”