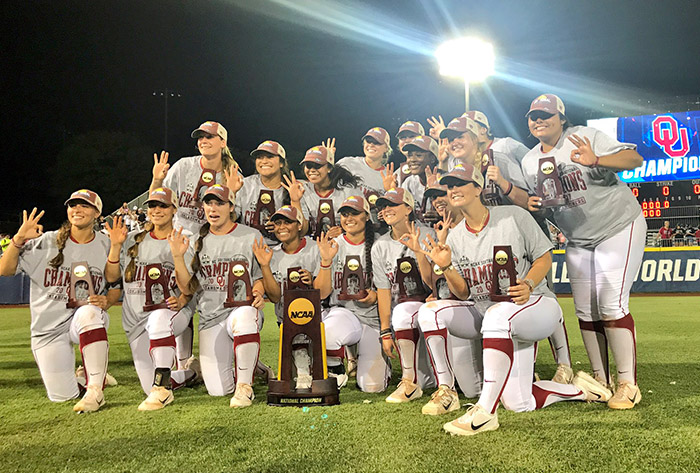 OU, which has won four national titles, trailed 3-1 entering the bottom of the second. Behind a four-run two-out rally, the Sooners took the lead for good and held on for the one-run win. Oklahoma sent nine batters to the plate as it grabbed a 5-3 advantage.

UF’s (58-10) Delanie Gourley entered with one out and the bases loaded. She struck out the first batter, but Caleigh Clifton drew a walk and tournament MVP Shay Knighten cleared the bases with a three-run double to right centerfield. It was Knighten’s second straight game-winning hit as she hit the three-run home run in the 17th inning of game one.

That would be Knighten’s only hit of the game as she finished 1-for-3 with three RBI. Clifton was 2-for-2 with a RBI and run scored.

The Sooners used four pitchers on the evening with freshman Mariah Lopez (18-1) earning the win. She relieved starter Paige Parker with two outs in the second and allowed a run on one hit with two strikeouts and no walks. Nicole Mendes, who started in rightfield, tossed and inning of scoreless relief before Paige Lowary slammed the door shut with a perfect two-inning save (3 strikeouts), her 11th of the season.

The Sooners got off to a quick start courtesy of a leadoff home run by Mendez. She laced an opposite field long ball over the leftfield fence for a 1-0 lead in the bottom of the first.

The Gators answered in the top of the second with three runs. Sophia Reynoso lined a 1-2 pitch over the fence in left to knot the score at 1-1. With two outs, Aleshia Ocasio’s hard grounder through the right side put UF on top 2-1 and knocked starter Paige Parker out of the game. The Gators added the third run when Lopez hit Kayli Kvistad.

Chelsea Herndon got a run back for the Gators in the third with a two-out solo home run to center. After the early fireworks, Herndon’s long ball would be the last run of the game.