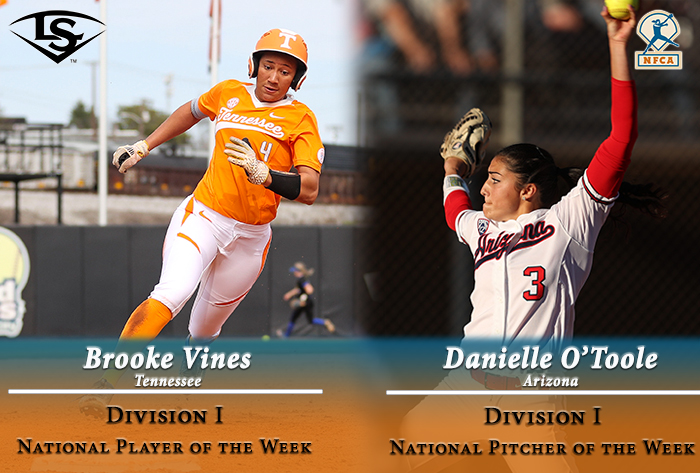 Vines had a monster week for the Volunteers, guiding them to four victories, including a three-game SEC sweep of then-No. 23 Ole Miss. She posted a .727 batting average with eight hits, nine RBI, five runs scored, a 1.273 slugging percentage and .692 on-base percentage. A native of Rancho Palos Verdes, Calif., Vines collected multiple hits and RBI in three of the four games, which included matching a career best with three RBI in wins against RV North Carolina and the Rebels. In that game against Ole Miss, she was 3-for-3 with her first home run of the season and two runs scored. She also scored twice in game one victory over the Rebels.

“I am so blessed and honored to receive this award,” said Vines. “All glory to God because this is all His doing. This award makes me want to continue to work even harder to become the best player and person I can be.”

O’Toole was masterful in her two starts against then-No. 6 Washington. The sophomore southpaw no-hit the Huskies in her first start of the weekend. O’Toole fanned eight and was a walk and a hit batsman away from a perfect game. It marked the first Wildcat no-hitter against a top-10 opponent since 1993. She followed that with a three-hit complete game victory, striking out two in a 5-2 triumph. O’Toole posted a 0.00 ERA and limited Washington to a .065 batting average in 14 innings of work.

“I’m proud of the outing our team had this weekend and I am thankful to have them and be a part of such a special group,” said O’Toole. “I’m happy and honored to be pitcher of the week and I never would have achieved the success without them. I’ll never forget my teammates coming through in big moments, and am excited to continue to compete with them.”