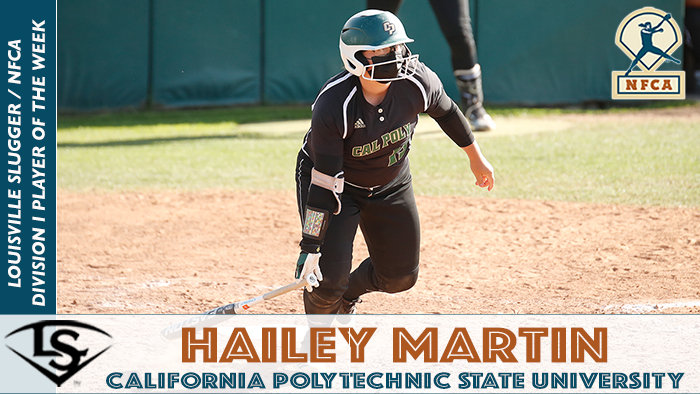 LOUISVILLE, Ky. – Highlighted by perfect games, North Texas’ Hope Trautwein and Miami University’s Courtney Vierstra shared the Wilson/NFCA DI Pitcher of the Week honors, while Hailey Martin’s near perfection at the plate for Cal Poly earned her Louisville Slugger/NFCA Player of the Week recognition. The trio was recognized for their outstanding play during the week of April 5-11.

Trautwein made history on April 10. The Mean Green hurler struck out all 21 Arkansas Pine Bluff batters to record the program’s first-ever perfect game. Trautwein, who hails from Pflugerville, Texas, became just the third NCAA DI pitcher to punch out 21 in a seven-inning game and is believed to be the first to do so with every out being a strikeout. It marked the second time this season, Trautwein fanned 21 as did so in a complete-game effort versus Southeastern Louisiana on Feb. 13.

Vierstra was nearly unhittable in a Mid-American Conference series at Akron over the weekend. She opened the series with a five-inning no-hitter and capped it off with a seven-inning perfect game. Vierstra struck out 12 in each of those starts and finished the series with 32 punchouts in 16.1 innings of work. The senior from Thornville, Ohio was 3-0 with a 0.00 ERA, allowing just one hit, issuing zero walks and holding the Racers to a .059 batting average. It was the second perfect game of the season for Vierstra.

Martin was a tough out in a four-game Big West series against Hawai’i. The senior first baseman went 12-for-13 (.923) at the plate with three doubles and 15 total bases. She also drew a pair of walks, which upped her on-base percentage to .933, and slugged 1.154. Martin reached base safely in her first eight plate appearances, which included a 4-for-4 game-two outing with a double and RBI. After being retired in her first at bat of game three, the Tracy, Calif. native was 5-for-5 with two doubles (both in game four), a walk and RBI in the final two contests.