UCLA runs away with game one of 2019 WCWS Championship Series 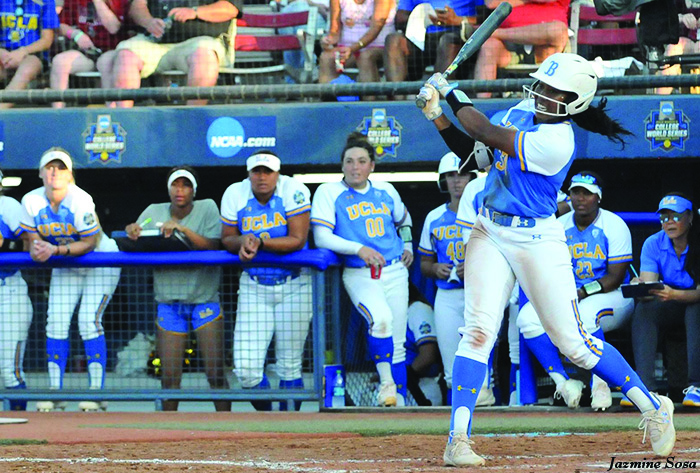 OKLAHOMA CITY– No. 2 UCLA ran away with game one of the Championship Series with a 16-3 victory over No. 1 Oklahoma on Monday evening at the 2019 Women’s College World Series at USA Softball Hall of Fame Stadium/OGE Energy Field. The Bruins (55-6) scored in all but one inning, including 11 over the final two frames to tie for the most runs in a single WCWS contest.

UCLA launched four home runs, three in the sixth, and recorded 16 hits en route to its largest margin of victory in the WCWS. Kinsley Washington paced the 16-hit attack with a 4-for-4 outing, scoring three runs and driving in one.

For the Sooners (57-5), it was the most runs allowed since Feb. 26, 2016 in a 16-9 loss to Michigan. OU finished with seven hits, including home runs off the bats of Shay Knighten and Grace Green

The Bruins put the game out of reach with combined 11 runs over the final two innings. A six-run sixth was powered by three long balls and pushed the advantage to 11-1. Brianna Tautalafua led off with a solo shot down the line in left. Following OU’s second pitching change of the contest, Bubba Nickles drew a four-pitch walk and Briana Perez stepped up and laced a three-run homer to right centerfield. Garcia capped off the big frame, lining an 0-2 pitch for a two-run jack into the leftfield bleachers.

In the five-run seventh, Julia Rodriguez and Garcia each registered two-run base knocks with Nickles adding an RBI single.

Nickles, Perez, Aaliyah Jordan and Garcia recorded two hits apiece. Nickles scored three runs and Perez registered three RBI. Garcia (28-1) picked up the win in the circle, allowing a run on three hits with a walk in five innings of work. Megan Faraimo and Holly Azevedo each tossed an inning of relief.

Aaliyah Jordan left the yard to put the Bruins on the board in the top of the first. An inning and a half later, Shay Knighten evened things up at 1-1 with an opposite field homer to rightfield.

Three Sooner miscues, the most they have committed in one game all season, in the top of the third led to pair of UCLA runs and a 3-1 Bruin advantage.

UCLA scored single runs in the fourth  and fifth to push its advantage to 5-1 thanks to two-out RBI hits by Washington and Taylor Pack, respectively.