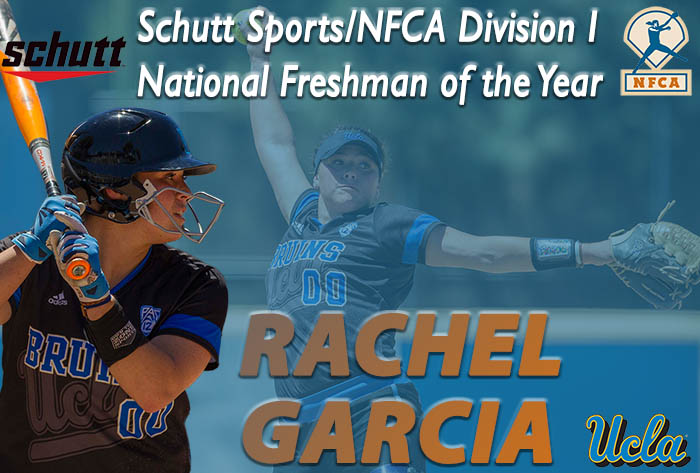 Garcia, the Pac-12 Freshman of the Year, is having a tremendous season both at the plate and in the circle, playing an integral role in the Bruins returning the WCWS for the third straight season. Against a red-hot Ole Miss squad in the Super Regionals, Garcia picked up the win in both contests. In game one, she went the distance in an 11-inning thriller, striking out a career best 12 and throwing 232 pitches. Garcia also put the Bruins on the board with her eighth homer of the season. Less than 24-hours later, the Palmdale, Calif. native entered the circle in the bottom of the fourth inning and tossed four innings of hitless relief with four punchouts in a 1-0 win.

She twirled her first collegiate no-hitter in the NCAA Regional opener, an 8-0 five-inning victory over Lehigh. A second team NFCA All-Region and first team All-Pac-12 selection, Garcia leads the Bruins with a 22-7 record, 1.92 ERA and 196 strikeouts in 182.2 innings. At the plate, she is hitting .327 with seven long balls, 27 RBI and 11 doubles. She has allowed zero or one earned runs in 30 of her 41 appearances.

Created in 2014, the award honors outstanding athletic achievement among Division I freshmen softball student-athletes. Garcia is the fifth (co-recipients in inaugural year) winner in the brief history of the award. She joins a small, but prestigious list that includes 2016 honoree Amanda Lorenz of Florida, 2015 selection Paige Parker of Oklahoma and inaugural co-winners, Kasey Cooper of Auburn and Annie Aldrete of Tennessee.