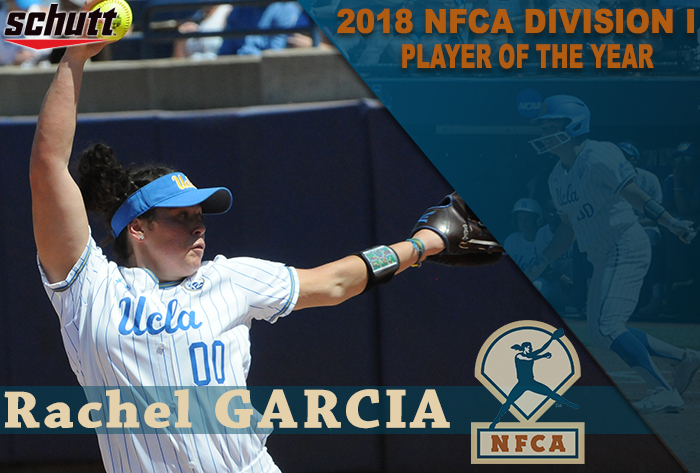 LOUISVILLE, Ky. – UCLA sophomore Rachel Garcia has been named the 2018 Schutt Sports/NFCA Division I National Player of the Year, announced the Association on Thursday.

Garcia, a two-time NFCA All-American, led the Bruins’ pitching staff with a 29-4 record, 1.31 ERA and 273 strikeouts in 208 innings in the circle.  In addition to her pitching accolades, Garcia boasted a .339 batting average, 11 home runs and 54 RBI.  The Pac-12 and espnW Player of the Year tossed 21 complete games this season and twirled nine shutouts, adding two saves and limiting opponents to a .143 batting average.

Named to the WCWS all-tournament team, Garcia pitched 23 of the Bruins' 27 innings in the WCWS, recording 42 strikeouts, a pair of wins and three complete games. She fanned 15 in both Bruin victories against Florida State last Thursday and Florida last Friday, adding 12 strikeouts in nine innings on Saturday versus FSU.

The award was voted on by the members of the NFCA’s NCAA Division I All-American and Coaching Staff of the Committee. Garcia is the third recipient of the award, joining 2017 winning Megan Good of James Madison and inaugural winner Sierra Romero of Michigan.