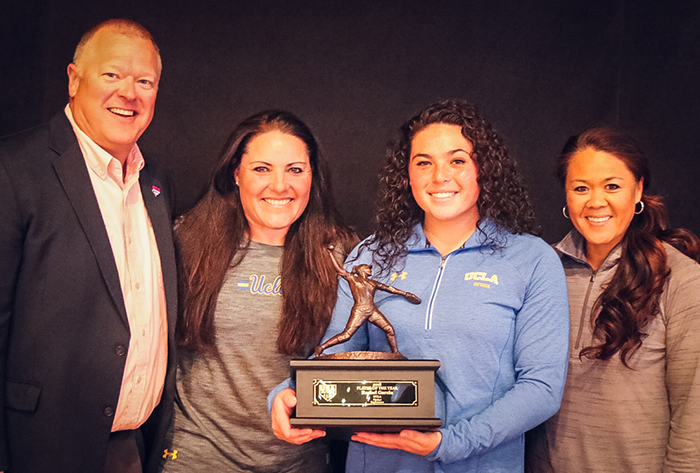 OKLAHOMA CITY — USA Softball, the National Governing Body of Softball in the United States, announced that UCLA’s Rachel Garcia has been named the 2018 USA Softball National Collegiate Player of the Year. The award, which is considered the most prestigious honor in Division I women’s softball, is designed to recognize outstanding athletic achievement by female collegiate softball players across the country. This season, the redshirt sophomore helped lead UCLA to its fourth-consecutive NCAA Women’s College World Series (WCWS) and the 28th overall for the program.

“I’m honored,” said Garcia on being named the USA Softball Collegiate Player of the Year.  “This whole season I’ve had my team’s back and they’ve had mine in return. To win this award, I’m just very honored and humbled.”

The 2018 Pac-12 Player of the Year, Garcia leads the Bruins’ pitching staff with a 1.02 ERA, a 27-3 record and 273 strikeouts in 185 innings in the circle.  In addition to her pitching accolades, Garcia boasts a .356 batting average, 11 home runs and 53 RBI.  In just her second season in the circle at UCLA, Garcia has racked up two First-Team All-Pac-12 honors and was recently named the espnW Player of the Year.

Garcia has pitched 18 complete games this season and has been a part of 11 shutouts, including nine solo blankings, adding two saves and limiting opponents to a .129 batting average.

“What an honor to be able to have this opportunity to be named the USA Softball Collegiate Player of the Year,” said UCLA Head Coach, Kelly Inouye-Perez.  “It’s also an honor that the trophy was modeled after Lisa Fernandez, her coach and somebody that I believe Rachel will have the same type of career as.  Rachel’s a fierce competitor and has a hard work ethic.  I think what truly defined her is when she came into UCLA.  She came off being a phenomenal senior, Gatorade National Player of the Year and then she ended up getting hurt and went down for her freshman year but it was a defining year for her.  I got to see her and learn more about her in that off year. She worked hard and never gave up – it was hard, and that’s what makes me so proud.  Her work ethic, attitude and her ability to stay committed to her team it all came full circle because now she’s back on top of her game. She’s part of the USA Softball Women’s National Team and led her team back here to Oklahoma City with the opportunity to do great things. I’m just proud of her because through all of that she never quit. What she’s become and what she’ll continue to do in this sport, I’m excited because she now has a different layer of toughness than just being a softball player.  She has learned to appreciate the hard work that it takes to get her to be where she is.  She’s very humble and I think that’s why her teammates love to play for her. She’s somebody who I believe will have a phenomenal career and she’s only a sophomore.”

The USA Softball Collegiate Player of the Year award is voted on by coaching representatives of 11 Division I Conferences in the 10 USA Softball Regions, members of the media who consistently cover Division I Softball across the country as well as past winners of the award.