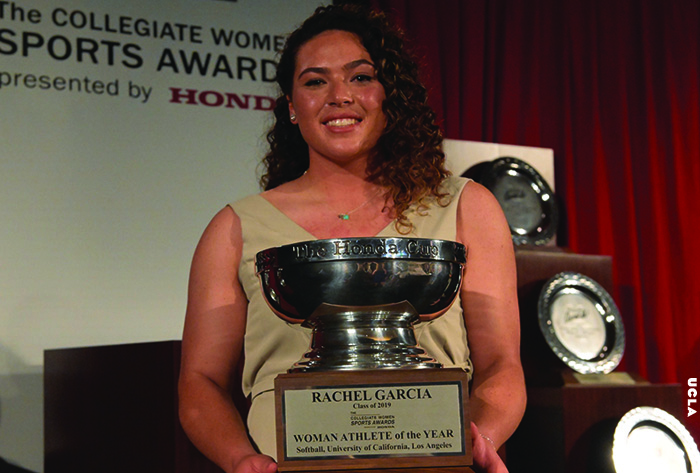 LOS ANGELES - UCLA redshirt junior Rachel Garcia was named the winner of the 2019 Collegiate Woman Athlete of the Year Award and the prestigious Honda Cup, as announced during a live television ceremony at USC's Galen Center.

The Top Three finalists were selected by a voting of nearly 1,000 NCAA member schools, and the Honda Cup winner was chosen by the Board of Directors of the Collegiate Women Sports Awards program.

Garcia went 5-0 in the circle at the WCWS with a 1.75 earned run average and 33 strikeouts in 36 innings. She went the distance four times in Oklahoma City, including a 10-inning, 16-strikeout performance against Washington (June 2), capping the game off on the offensive end with a walk-off, three-run homer to propel the Bruins into the WCWS Championship Series. She hit another home run versus Oklahoma in game one of the WCWS Championship Series (June 3), as she batted .333 (5-for-15) with two homers, eight RBI and five walks. Garcia led all WCWS pitchers in wins and was second in strikeouts, and was also first in RBI.

The CWSA, in its 43rd year, honors the nation's top NCAA women athletes recognizing superior athletic skills, leadership, academic excellence and eagerness to participate in community service.  Since commencing its sponsorship in 1986, Honda has provided more than $3.1 million in institutional grants to the universities of the award winners and nominees to support women's athletics programs at the institutions.