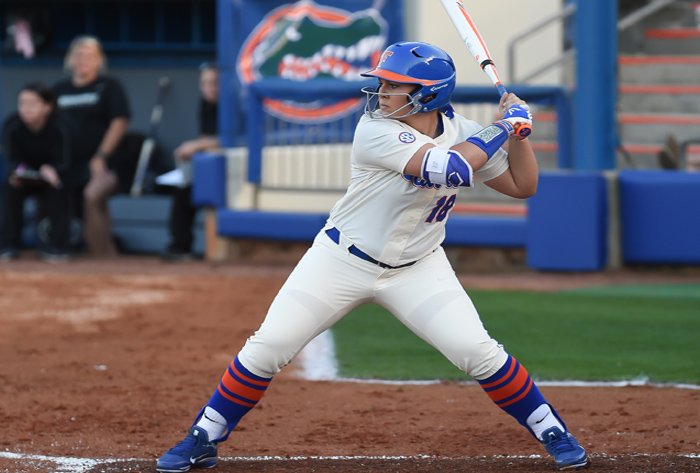 LOUISVILLE, Ky. – In a poll that saw a lot of shuffling, Florida remained one of the few constants as it used a dominant 7-0 week to secure the unanimous No. 1 ranking in the USA Today/NFCA Division I Top 25 Coaches Poll for games played Feb. 15-21.

In remaining undefeated, the Gators (11-0) recorded four more shutouts and outscored the opposition, 52-3 to earn all 32 first-place votes and 800 points. UF blanked Jacksonville in its home opening doubleheader, which was highlighted by sophomore Aleshia Ocasio’s first collegiate no-hitter and 16th in program history. The Gators followed with a five-game sweep of their Citrus Classic opponents.

Making significant moves in the poll this week were No. 10 James Madison and No. 16 Texas A&M, who each moved up nine positions. The Dukes (9-1) went undefeated at the Michele Smith Pediatric Cancer Research Invitational in Clearwater, Fla.), which included triumphs over No. 3 Auburn (3-2) and then No. 12 Tennessee (9-0 in 5 inn.). IN holding those high-powered offenses to just five hits, JMU earned its first top-10 ranking in program history.

Alabama leapfrogged into the four spot over LSU. The Crimson Tide (10-1) went 6-0 with four shutouts. They picked up a road win at UAB and won all five games at the Panther Invitational hosted by Georgia State. In addition, head coach Patrick Murphy earned his 900th career victory in a triumph over Maryland on Feb. 21. The Tigers (8-2) dropped their opener at the Mary Nutter to then-No. 9 Arizona before closing out with four victories, including two against then-No. 15 UCF and then-No. 8 UCLA.

After taking two-of-three from then-No. 6 Oregon in a top 10 series, Louisiana-Lafayette took over the No. 6 ranking, while the Ducks (8-3) fell to No. 7. The Ragin’ Cajuns sandwiched a pair of one-run (3-2 & 5-4) triumphs around Oregon’s game-two victory (6-3). Oregon (twice) and Louisiana also run-ruled Central Arkansas.

The USA Today/NFCA Division I Top 25 Poll is voted on by 32 NCAA Division I head coaches, one representing each conference. Records reflect games played through Feb. 21, 2016.