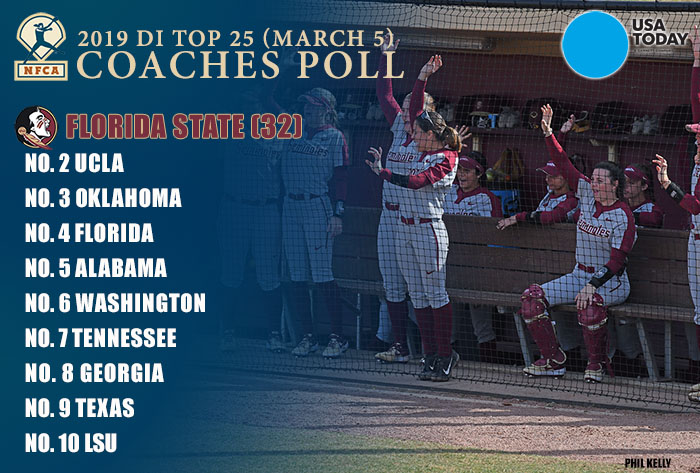 LOUISVILLE, Ky. – Florida State remained undefeated with four wins last week and is the unanimous No. 1 for the first time this season in this week’s USA Today/NFCA Division I Top 25 Coaches Poll. The Seminoles (21-0) captured all 32 first-place votes and 800 points.

FSU was one of three programs to reach the 20-win plateau last weekend as it extended its winning streak to 27 games. The Noles swept their competition in Orlando, knocking off Toledo, RV Louisiana Tech, Dartmouth and host UCF.

The top 10 teams remained the same except for a few flip-flopping positions with the most significant movement in the bottom half of the poll as No. 15 Texas Tech (17-1) climbed three spots and No. 24 Oregon (11-7) dropped four positions. Joining for the first time in 2019 in Wisconsin (17-2) at No. 23 and returning after an one-week absence is No. 25 Michigan (9-8), giving the Big Ten four programs in the top 25. The Wolverines (9-8) went 3-0 at the Judi Garman with two top-five wins over No. 2 UCLA and then-No. 5 Washington.

Moving into the No. 3 spot is Oklahoma (15-2), which defeated then-No. 25 Oregon State (3-0) and No. 11 Louisiana (8-0) at home in another tournament that was cut short due to inclement weather and unseasonably cold weather.

The Gators (21-2) slipped to No. 4 after a 3-2 trip to California in which they picked up three one-run wins, two in extra innings, at the Judi Garman. UF edged New Mexico and then-No. 5 Washington, 1-0 in eight innings and Oregon, 2-1.

Alabama inched up to No. 5 and is the only other undefeated team in the Top 25 at 20-0. The Crimson Tide picked up five more wins, at UAB and four at home against Michigan State, Southern Miss twice and St. Francis.

Tennessee, Georgia, Texas and LSU round out the top-10 with the Lady Vols (16-2) as the only program who enjoyed an undefeated week. The Bulldogs (18-2) and Tigers (18-4) each suffered one loss, going 4-1 and 5-1, respectively. The Longhorns (16-3) opened their week with four wins – Houston Baptist, Wisconsin, then-No. 15 Arizona State and Princeton – before dropping their final two to the host Sun Devils and Badgers.

The 2019 USA Today/NFCA Division I Top 25 Poll is voted on by 32 NCAA Division I head coaches, one representing each conference. The records reflect games played through March 3, 2019.