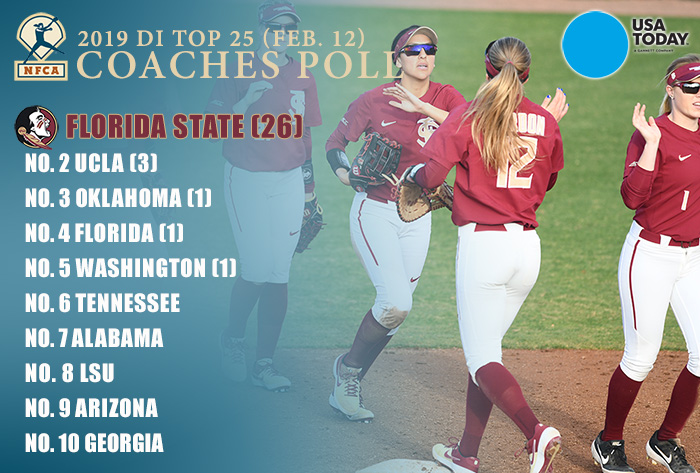 LOUISVILLE, Ky. – Florida State opened its 2019 campaign with five wins to remain No. 1 in the first USA Today/NFCA Division I Top 25 Coaches Poll of the season. The defending champs received 26 of a possible 32 first-place votes and 787 points.

The Seminoles (5-0) are one of nine top-10 teams to sport an undefeated record after the first weekend of play. After surrendering two runs in the season-opening win over UNCW, the Seminole pitching staff recorded four shutouts against Iowa State (2), UNCG and UNCW, including a combined no-hitter by newcomers Kara Bilodeau and Makinzy Herzog in the finale.

UCLA, who earned three first-place votes, held on to the No. 2 spot with a 5-0 opening weekend, sweeping the competition in the Aloha State. The Bruins topped, UT Arlington, Fresno State, host Hawai’i, Georgia State and Saint Mary’s.

Oklahoma, Florida and Washington each received one first-place vote. The Sooners (5-0) and Gators (5-0) leapfrogged the Huskies (4-1) into the No. 3 and 4 rankings. OU picked up five home wins over Syracuse (2), Grand Canyon, Charlotte and San Diego State, allowing just two runs and scoring 44.

No. 4 UF picked up two signature wins in its 5-0 start. The Gators knocked off then-No. 19 Michigan, 6-0, and then-No. 7 Arizona, 3-2. They also posted victories over Illinois State, North Carolina State and host RV USF.

The Huskies slipped to No. 5 after opening with a 4-1 mark in Puerto Vallarta, Mexico. Washington opened with a 9-1 win over North Carolina, but suffered its first setback in a 3-2 eight-inning loss to RV Notre Dame. The Huskies bounced back with triumphs over Duke, RV Liberty and then-No. 18 Baylor.

SEC foes Tennessee, Alabama and LSU hold down No. 6 through No. 8 spots. The Lady Vols (5-0), Crimson Tide (5-0) and Tigers (6-0) dispatched their competition, outscoring their opponents by a combined 175-15 margin. UT and Alabama moved up two spots, while LSU entered the top 10 after opening 2019 in the 11 hole.

No. 9 Arizona fell from No. 7 after a 3-2 start. The Wildcats earned wins over then-No. 19 Michigan, RV USF and Illinois State, but suffered defeats to then-No. 5 Florida and North Carolina State.

Georgia also slipped in the poll coming in at No. 10, following a preseason ranking of No. 6. The Bulldogs (4-1) opened with four wins over St. John’s, host Florida Atlantic, Bethune-Cookman and Virginia before being defeated by new-No. 24 Indiana.

The Hoosiers (5-0) are ranked in the USA Today/NFCA Top 25 Coaches Poll for the first time since May 7, 1996 when they were No. 23. IU opened with five wins over Virginia, Bethune-Cookman, St. John’s, Florida Atlantic and the Bulldogs.

The 2019 USA Today/NFCA Division I Top 25 Poll is voted on by 32 NCAA Division I head coaches, one representing each conference. The records reflect games played through Feb. 10, 2019.

The 2019 USA Today / NFCA Division I Top 25 Coaches Poll is voted on by 32 NCAA Division I head coaches with one representing each of the NCAA’s Division I Conferences. Record reflect games played through Feb. 10, 2019.