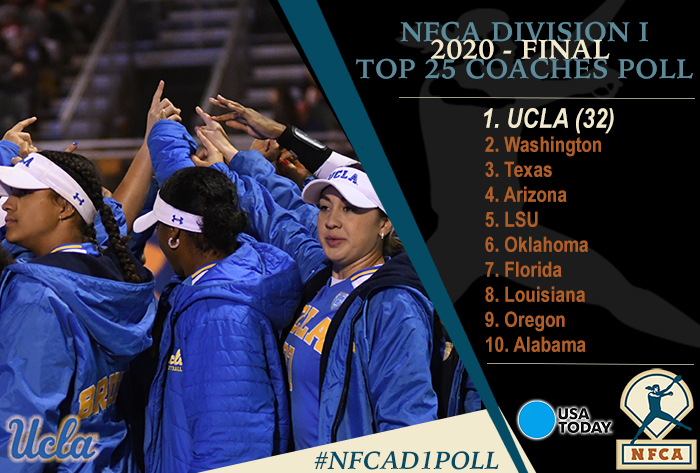 LOUISVILLE, Ky. – UCLA was voted the unanimous No. 1 team in the final 2020 USA Today/NFCA Division I Top 25 Coaches Poll. The season was cut short due to the COVID-19 pandemic with all NCAA spring championships canceled on March 12.

With very little competition during the final week of the season (March 9-12), the top 14 teams remained the same with Oklahoma State, which was 13th last week, moving into a tie with Florida State at No. 12. There was some movement in the final 11 spots as South Carolina and Virginia Tech inched up one spot to No. 15 and 16, respectively, while Arizona State slid from No. 15 to No. 17.

The Bruins (25-1) collected wins over seven nationally-ranked teams, posting an NCAA-best 13 shutouts (tied with Arizona State) along the way. They knocked off Alabama, Georgia and Florida State to come out as the only undefeated team at the ESPN St. Pete/Clearwater Elite Invitational. UCLA also took down Florida, Michigan, UCF and Minnesota, while its lone defeat was at the hands of No. 3 Texas.

In the final top-25 matchup of 2020, No. 7 Florida topped No. 12 Florida State, 5-2, on March 11 in Gainesville. No. 5 LSU, No. 8 Louisiana, No. 9 Oregon, No. 11 Kentucky, Oklahoma State, No. 14 Georgia, Arizona State, South Carolina, Virginia Tech, Minnesota, Arkansas, Mississippi State, UCF and Baylor also picked up victories during the final week of play. Twenty-two ranked programs ended their seasons in triumph.

UCLA led NCAA Division I with 25 wins as 15 top-25 programs finished their respective seasons with 20-plus triumphs.

The Southeastern Conference led the way with nine nationally-ranked programs, while the Pac-12 had four in the top 10, including the top two programs, UCLA and No. 2 Washington, and five overall. Four Big 12 institutions finished ranked led by No. 3 Texas and No. 6 Oklahoma with the Atlantic Coast Conference and Big Ten each having two.

A total of 33 programs earned rankings over seven polls with UCF and Fresno State making their first appearances (March 3) since 2016 and 2017, respectively. On the flip side, Tennessee dropped out of the top-25 on March 3 for the first time since 2004. The Lady Vols entered at No. 19 on Feb. 10, 2004 and were ranked consecutively in 255 polls.

The 2020 USA Today/NFCA Division I Top 25 Poll is voted on by 32 NCAA Division I head coaches, one representing each conference.