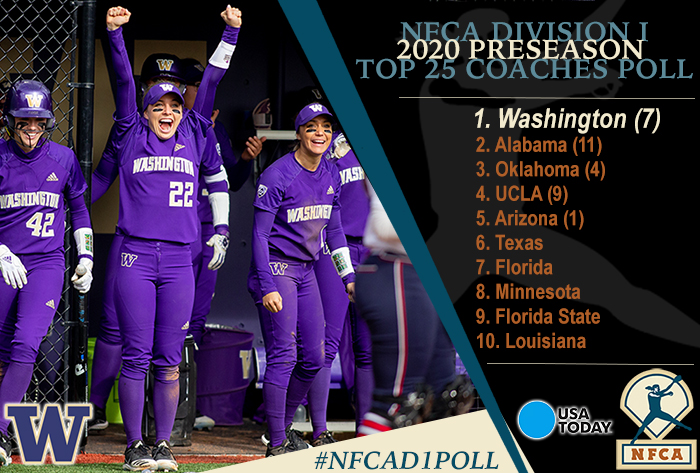 LOUISVILLE, Ky. – Washington is the preseason favorite as the national semifinalists received seven first-place votes and 755 points to capture the top spot in the 2020 USA Today/NFCA Division I Preseason Top 25 Coaches Poll, announced the Association on Tuesday morning.

In a tightly contested poll that saw five teams receive at least one first-place vote, the Huskies (52-9) edged out fellow national semifinalist and No. 2 Alabama (752) by three points. The Crimson Tide (60-10) tallied the most first-place nods with 11.

It marks the first time Washington has been the preseason No. 1 since 2010 and the highest preseason ranking for Alabama since it was first at the start of the 2013 campaign. Coincidentally, the Huskies and Crimson Tide held the top two spots in the previously-mentioned 2010 poll.

Also earning first-place votes were last year’s runner-up, Oklahoma (57-6) with four, and national champion, UCLA (56-6) with nine, along with Women’s College World Series participant Arizona (48-14) with the final one. The Sooners and Bruins come in at No. 3 and 4 with 729 and 716 points, respectively, while the Wildcats sit a No. 5 with 695 votes.

The Southeastern Conference led the way with ten ranked programs, while three leagues – Big 12, Big Ten and Pac-12 – boasted four teams apiece. Three of the Pac-12’s teams were in the top five. The Atlantic Coast Conference, Colonial Athletic Association and Sun Belt Conference each saw a single program among the top 25.

The 2020 USA Today/NFCA Division I Top 25 Poll is voted on by 32 NCAA Division I head coaches, one representing each conference. Final 2019 records are shown with first-place votes in parentheses. The first regular season poll will be published on Feb. 11.

The 2020 USA Today / NFCA Division I Top 25 Coaches Poll is voted on by 32 NCAA Division I head coaches with one representing each of the NCAA’s Division I Conferences.