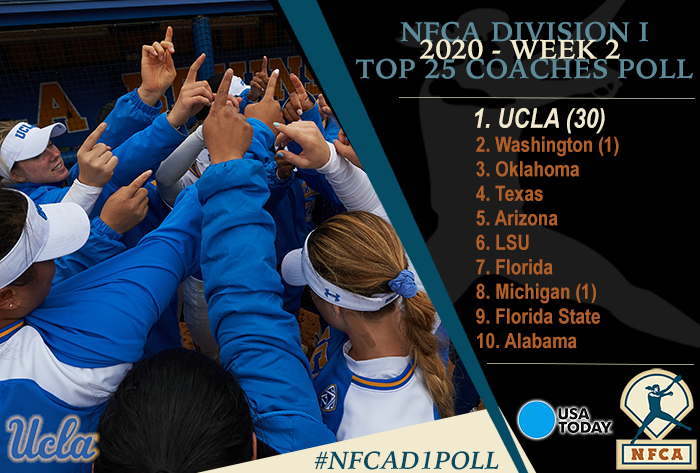 LOUISVILLE, Ky. – Coming out unscathed from the St. Pete Clearwater Elite Invitational, UCLA ascended to No 1 in this week’s USA Today/NFCA Division I Top 25 Coaches Poll. The Bruins (11-0), who knocked off three top-25 programs, received 30 of a possible 32 first-place votes and 798 points.

Previous No. 1 Washington dropped its first game of the season to Alabama at the Invite, but left the Sunshine State with a 5-1 mark. The No. 2 Huskies, who received one first-place vote, toppled three ranked foes in Florida State (7-0), then No. 18 South Carolina (5-4) and then-No. 17 Texas Tech (11-5 in 8 inn.), while also defeating Liberty at Invite and UCF on the road in a mid-week clash.

Oklahoma slipped to No. 3 as it went 4-1 at the Hillenbrand Invitational, including a win over the host and then-No. 4 Arizona (6-4 in 10 inn.). Texas continued to roll moving up two spots to No. 4. The Longhorns (10-0) posted four wins during the second week of the Puerto Vallarta College Challenge. They defeated Cal Baptist, No. 12 Tennessee and Ole Miss.

The Wildcats (9-1) come in at No. 5, going 4-1 at its home-opening tournament. Arizona edged Long Beach State, Utah, Northern Iowa and Bryant and came back to shutout the Beach, 6-0.

No. 6 LSU and No. 7 Florida moved up one spot apiece, while Michigan jumped three positions to No. 8. The Tigers (8-1) enjoyed a 3-1 week, splitting a home-and-home with then-No. 13 Louisiana. The Gators (11-1) swept through their first seven home games, posting four shutouts and outscoring the opposition. 51-4. The Wolverines (9-0), who earned a first-place vote, remained undefeated with a sweep of Louisville and then-No. 25 North Carolina at the Big Ten/ACC Challenge in Chapel Hill, N.C.

Florida State dipped to No. 9 after a tough 2-4 stretch, which included a 1-4 mark against the field at the St. Pete Clearwater Elite Invite. All four of the Seminoles’ (7-4) defeats came against top-25 competition, falling to Washington, UCLA, then-No. 14 Minnesota and then-No. 23 Northwestern.

Alabama dropped one more spot to No. 10. The Crimson Tide (4-5) went 3-2 at the Invite, earning wins over Washington, Liberty and USF, while falling to UCLA and then-No. 16 Oklahoma State.

No. 15 Oregon and No. 16 Arizona State cracked the top 20, while Virginia Tech entered the top 25 this week at No. 24. North Carolina dropped out.

The 2020 USA Today/NFCA Division I Top 25 Poll is voted on by 32 NCAA Division I head coaches, one representing each conference. Records reflect games played through Feb. 16 with first-place votes in parentheses.

The 2020 USA Today / NFCA Division I Top 25 Coaches Poll is voted on by 32 NCAA Division I head coaches with one representing each of the NCAA’s Division I Conferences. Records reflect games played through Feb. 16.