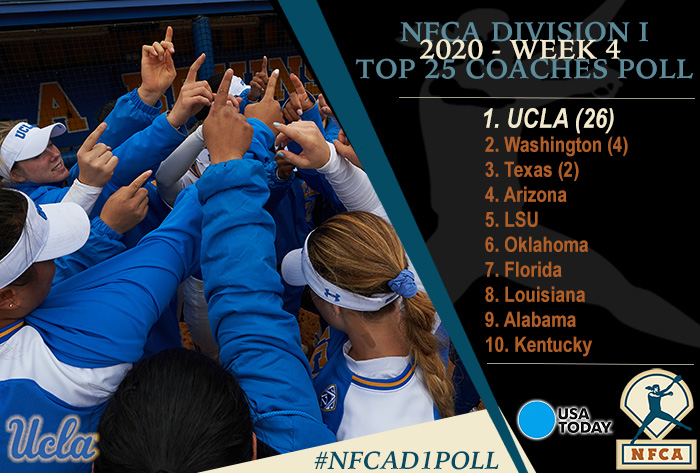 LOUISVILLE, Ky. – Despite suffering its first loss of the season, UCLA remained No. 1 in the 2020USA Today/NFCA Division I Top 25 Coaches Poll. The Bruins (19-1), who dropped an extra-inning affair to Texas, captured 26 first-place votes and 793 points.

No. 2 Washington and No. 3 Texas picked up four and two first-place votes, respectively. In the matchup between those two squads, the Longhorns (20-3) edged the Huskies (19-2) 8-6 at the Judi Garman Classic. It was UW’s only defeat at the Garman as it topped then-No. 4 LSU, Fresno State, then-No. 13 Michigan and Cal State Fullerton.

Texas posted a 5-2 week with previously-mentioned triumphs over UCLA and Washington. The Longhorns also defeated Michigan and Boise State at the Garman, while dropping a one-run affair to Fresno State. Prior to heading out west, UT split a home twinbill with then-No. 10 Louisiana.

Following a 5-0 showing, including two wins over host Alabama at the Easton Crimson Classic, Arizona rose to No. 4. The Wildcats (17-3) topped the then-No. 8 Crimson Tide in a pair of one-run contests. They also defeated McNeese State twice and UT Arlington.

LSU fell one spot to No. 5 after a 3-2 outing at the Garman. The Tigers (16-3) picked up wins over then-No 25 Texas Tech, California and Colorado State, but dropped contests against Loyola Marymount and Washington.

No. 6 Oklahoma, No. 7 Florida and No. 9 Alabama each fell one position, while No. 8 Louisiana moved up two spots. The Sooners (15-4) won their Courtyard Marriott Tournament, topping then-RV Northwestern twice and Abilene Christian to go along with a split with RV North Texas.

Kentucky enters the fold at No. 10. The Wildcats (17-3) put on an offensive show, while its pitching staff posted three shutouts at the Spring Games. Matching the program’s best 20-game start, UK scored 66 runs over five games, while allowing just three.

The 2020 USA Today/NFCA Division I Top 25 Poll is voted on by 32 NCAA Division I head coaches, one representing each conference. Records reflect games played through March 1 with first-place votes in parentheses.

The 2020 USA Today / NFCA Division I Top 25 Coaches Poll is voted on by 32 NCAA Division I head coaches with one representing each of the NCAA’s Division I Conferences. Records reflect games played through March 1.