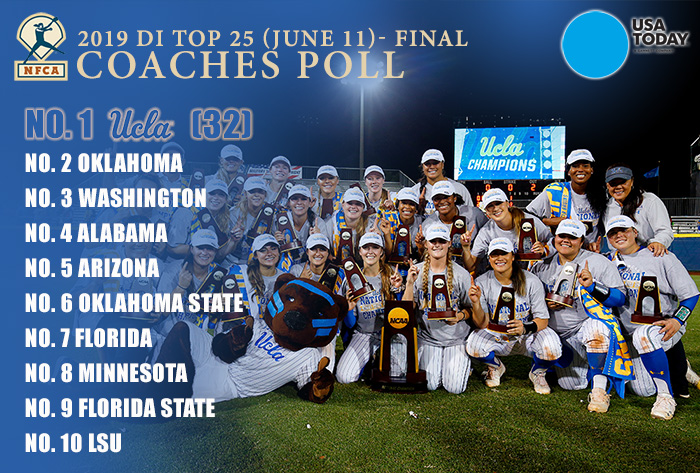 LOUISVILLE, Ky. – Following a run to its 12thnational championship, UCLA is the unanimous No. 1 program in the final 2019 USA Today/ NFCA Top 25 Coaches Poll of the season. The Bruins (56-6), collected all 32 first-place votes and 800 points.

UCLA ‘s 10-1 postseason mark culminated with the program’s first national title since 2010. Entering as the No. 2 overall seed, the Bruins went 5-0 at the Women’s College World Series with wins over Minnesota, Arizona and Washington before sweeping No. 1 Oklahoma in the Championship Series by the scores of 16-3 and 5-4. The title-clinching victory came in walk-off fashion as Kinsley Washington’s two-out RBI single in the bottom of the seventh scored Jacqui Prober with the championship run.

The national runner-up Sooners (57-6) reached the Championship Series for the third time in the last four years. OU, which held the No. 1 spot for the final five weeks of the regular season, posted an 8-4 record during the postseason and picked up WCWS wins over Alabama (twice) and Oklahoma State. During regionals, OU saw its home winning streak of 49 games and overall steak of 41 victories snapped by Wisconsin. The Sooners rebounded with an if-necessary game win over the Badgers and then swept Northwestern in Super Regionals.

National semifinalists Washington and Alabama come in at No. 3 and No. 4, respectively, while WCWS participants Arizona, Oklahoma State, Florida and Minnesota make up the rest of the top-eight. The Huskies (52-9) cruised into the WCWS with a 5-0 mark, allowing just one run during regional and super regional play. Washington went 2-2 at the WCWS with wins over the Gophers and Cowgirls.

The Crimson Tide (60-10) reached the 60-win plateau for the fourth time in program history, first since 2012. Alabama enjoyed an 8-3 postseason run and was one win away from reaching the Championship Series after forcing an if-necessary semifinal against Oklahoma.

The Wildcats (48-14) reached the WCWS for the 23rdtime in program history, the first since 2010. Arizona won its first six games of the postseason, sweeping through regionals and super regionals and capturing its WCWS opener versus Washington before dropping its next two contests.

The Cowgirls (45-17) returned to the WCWS for the first time since 2011 after knocking off No. 4 overall seed Florida State on the road in Super Regionals. OSU swept its regional and also won its WCWS opener against Florida.

The Gators (49-18) and Gophers (46-14)  posted 5-3 and 5-2 marks in postseason. UF swept its regional and defeated Tennessee two-out-of-three to clinch its third straight WCWS appearance. Minnesota opened with five straight wins in regionals and super regionals. With their sweep of LSU in the supers, the Gophers earned their first-ever trip to the WCWS.

The 2019 USA Today/NFCA Division I Top 25 Poll is voted on by 32 NCAA Division I head coaches, one representing each conference.

The 2019 USA Today / NFCA Division I Top 25 Coaches Poll is voted on by 32 NCAA Division I head coaches with one representing each of the NCAA’s Division I Conferences.