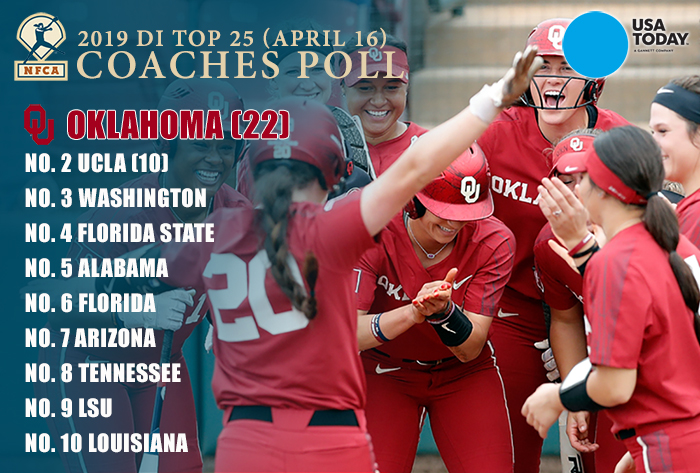 OU captured 22 first-place votes and 790 points, while No. 2 UCLA received 10 first-place nods and 773 points. The Sooners extended their NCAA Division I-best active winning streak by cruising to three shutouts at Kansas in Big 12 play. Oklahoma last held the top spot in the first regular-season poll of 2018.

The Bruins had their 19-game winning streak snapped by Oregon, 4-3, in the Pac-12 series opener. UCLA bounced back from their first league loss of the season with 8-3 and 8-1 triumphs over the Ducks to win the series.

In addition to a new No. 1, No. 23 Northwestern and No. 25 Colorado State return to the poll following long absences. The Wildcats (33-7), last ranked at No. 25 on April 22, 2014, are on a roll, having won 11 straight. Northwestern swept then-No. 25 Wisconsin over the weekend to remain the lone undefeated program in Big Ten play.

No. 3 Washington inched up another spot. The Huskies (35-6) swept their fourth straight Pac-12 series, taking down then-No. 24 Arizona State and extending their winning streak to 13 contests.

Florida State slipped to No. 4 following a weather-shortened 1-1 week. The Seminoles (38-5) dropped a wild 10-9 game at Louisville on April 8, which snapped an unbeaten streak of 52 consecutive ACC series. The last time FSU dropped a league series was May 5-6, 2012 at Maryland. They bounced back with an 8-6 win on April 14 at North Carolina.

No. 5 Alabama and No. 6 Florida went a combined 7-0 last week. The Crimson Tide (41-4) became the first NCAA program to reach the 40-win plateau in 2019 following a win over Georgia State and two versus then-No. 13 Georgia. The Gators (36-9) posted their second straight Southeastern Conference series sweep at Texas A&M and added a 1-0 triumph over in-state rival USF.

No. 7 Arizona and No. 8 Tennessee each moved up one position, while LSU fell two spots to No. 9. The Wildcats (35-7) stepped out of Pac-12 play and swept a three-game set at Grand Canyon, while the Lady Vols (32-8) cruised to a three-game SEC sweep of Mississippi State. The Tigers (36-9) posted a 3-1 mark last week. LSU blanked McNeese State before a 2-1 series win over then-No. 23 Kentucky.

No. 10 Louisiana extended its winning streak to 14 with a 4-0 week. The Ragin’ Cajuns (37-4) defeated Southeastern Louisiana, 7-1, before heading to the mountains of North Carolina for a Sun Belt sweep of Appalachian State.

The 2019 USA Today/NFCA Division I Top 25 Poll is voted on by 32 NCAA Division I head coaches, one representing each conference. The records reflect games played through April 14, 2019.

The 2019 USA Today / NFCA Division I Top 25 Coaches Poll is voted on by 32 NCAA Division I head coaches with one representing each of the NCAA’s Division I Conferences. Record reflect games played through April 14, 2019.