No. 1 Oklahoma runs winning streak to 31 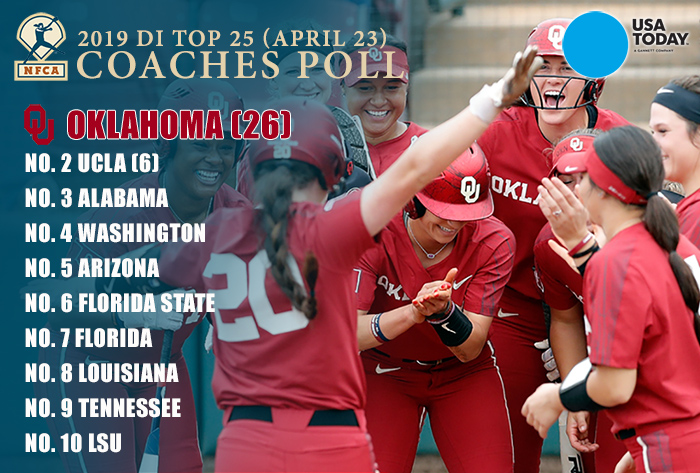 OU opened the key Big 12 series with a pair of closely-contested victories, knocking off the Longhorns (36-12) 3-1 and 4-3 in eight innings before running away with a 9-2 triumph to complete the sweep and match the program’s longest winning streak at 31. Additionally, the Sooners extended their Big 12 streak to a program and conference-record 37 games.

Alabama rose to No. 3 following a SEC road sweep at then-No. 6 Florida. Behind a strong pitching performance (two runs allowed), the Crimson Tide (45-4) earned their first sweep of the Gators (37-12) since 2006 and the first in Gainesville since 2001.

Washington dropped one spot to No. 4 after it had its 16-game winning streak snapped in game three at Utah. The Huskies (38-7) finished the week 3-1, scoring at least 11 runs in each of their three victories.

Arizona leapfrogged to No. 5 as it cruised to a three-game Pac-12 sweep of RV Stanford. Stretching their winning streak to 20 contests, the Wildcats (38-7) outscored the Cardinal 29-3 and have scored five or more runs 17 times during their streak.

Florida State and Florida dipped to No. 6 and 7. The Seminoles (41-8) did reach the 40-win mark last week, but dropped their first three games to North Carolina (twice) and Florida before sweeping Boston College at home. The Gators finished the week 1-3, earning a 4-0 win in Tallahassee.

No. 9 Tennessee and No. 10 LSU each suffered a pair of SEC defeats to fall one spot each. The Lady Vols (34-10) went 2-2 last week, picking up a win over ETSU ahead of dropping two-for-three at then-No. 16 Georgia. The Tigers (37-11) were defeated twice at then-No. 19 Arkansas before grabbing a game-three win.

The 2019 USA Today/NFCA Division I Top 25 Poll is voted on by 32 NCAA Division I head coaches, one representing each conference. The records reflect games played through April 21, 2019.

The 2019 USA Today / NFCA Division I Top 25 Coaches Poll is voted on by 32 NCAA Division I head coaches with one representing each of the NCAA’s Division I Conferences. Record reflect games played through April 21, 2019.