Oklahoma continues at No. 1 for third straight week 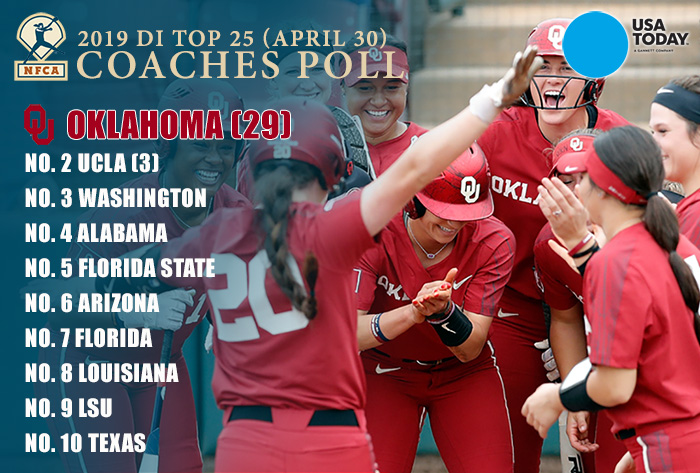 OU extended its Big 12 streak to a program and conference-record 40 games with a road sweep of Iowa State. The Sooners outscored the Cyclones, 31-5, and the series was capped off by a five-inning perfect game by junior Giselle “G” Juarez. Oklahoma wraps up the regular season against No. 12 Oklahoma State, needing just one win to claim its ninth straight Big 12 regular season title and three to post back-to-back 18-0 league marks.

UCLA, which collected the final three first-place votes and 771 points, swept its second straight Pac-12 opponent, topping Utah by a combined scored of 22-1.

No. 3 Washington and No. 4 Alabama flip flopped positions as did No. 5 Florida State and No. 6 Arizona. The Huskies (39-7) had a light week, defeating Utah Valley in their action, while the Crimson Tide (47-6) edged Belmont, 6-4, and dropped two-of-three to new-No. 21 Kentucky. The Seminoles (45-8) posted a 4-0 mark, which included an ACC sweep of Duke. The Wildcats (40-8) suffered one setback at California, but still came home with a Pac-12 series win.

No. 7 Florida and No. 8 Louisiana held onto their respective rankings. The Gators (39-13) collected a SEC-series win at then-No. 19 Auburn with 7-0 and 6-1 victories in games one and three. The Ragin’ Cajuns (46-4) ran their winning streak to 23 games and improved to 24-0 in Sun Belt play, setting the mark for league wins in a regular season.

No. 9 LSU and No. 10 Texas each improved one spot this week. The Tigers (40-12) won three-out-of-four with a win over Louisiana Monroe and two over Baylor, dropping the series finale to the Bears. The Longhorns (39-12) return to the top-10 following a three-game Big 12 sweep of Kansas.

The 2019 USA Today/NFCA Division I Top 25 Poll is voted on by 32 NCAA Division I head coaches, one representing each conference. The records reflect games played through April 28, 2019.

The 2019 USA Today / NFCA Division I Top 25 Coaches Poll is voted on by 32 NCAA Division I head coaches with one representing each of the NCAA’s Division I Conferences. Record reflect games played through April 28, 2019.