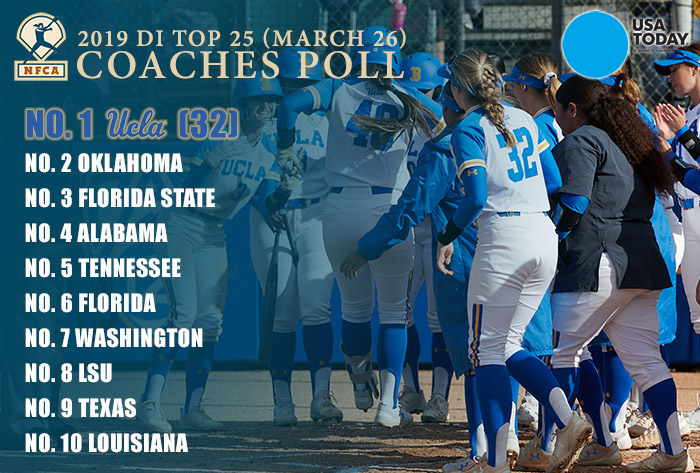 LOUISVILLE, Ky. –UCLA continues its firm hold on the top spot as the unanimous No. 1 program in this week’s 2019 USA Today / NFCA Top 25 Coaches Poll.

There was little movement in the top 10 as the first eight spots remained the same with Texas and Louisiana, switching the No. 9 and 10 positions. Joining the poll this week at No. 24 is a streaking Virginia Tech squad, which has won 10 straight and 16 of their last 17 games. The Hokies (27-4) are ranked in the poll for the first time since March 19, 2013.

No. 2 and No. 3 Florida State went a combined 9-0 last week. The Sooners (29-2) are rolling, topping North Texas and sweeping its Big 12-opening series at then-No. 14 Texas Tech. OU has won 19 straight this season and extended its conference winning streak to 28 contests. The Seminoles (32-3) scored at least eight runs in all five wins last week, including a ACC sweep of North Carolina State.

The last remaining undefeated team, No. 4 Alabama, suffered its first defeat of the season on the road in College Station, Texas. The Crimson Tide (33-1) picked up back-to-back 10-run wins over Texas A&M before suffering a 4-3 walk-off defeat in the SEC-series finale.

No. 5 Tennessee posted a 4-1 week, earning two non-conference shutouts at Liberty and at North Carolina before picking up an SEC-series win over then No. 14 Arkansas. No. 6 Florida defeated then-No. 20 Minnesota and took two from Mercer in non-conference action, while No. 7 Washington opened its Pac-12 series with 6-3 and 14-2 triumphs at Oregon.

Texas leapfrogged Louisiana for the No. 9 spot following a 4-0 week. The Longhorns knocked off Lipscomb on the road before returning home for a Big 12 sweep of Iowa State. The Ragin’ Cajuns (26-4) suffered a mid-week defeat against McNeese State at home, but rebounded in a big way, trumping South Alabama on the road by a combined score of 35-9 in a Sun Belt sweep.

Dropping out of the poll for the first time since week one was then-No. 22 Indiana.

The 2019 USA Today/NFCA Division I Top 25 Poll is voted on by 32 NCAA Division I head coaches, one representing each conference. The records reflect games played through March 24, 2019.

The 2019 USA Today / NFCA Division I Top 25 Coaches Poll is voted on by 32 NCAA Division I head coaches with one representing each of the NCAA’s Division I Conferences. Record reflect games played through March 24, 2019.