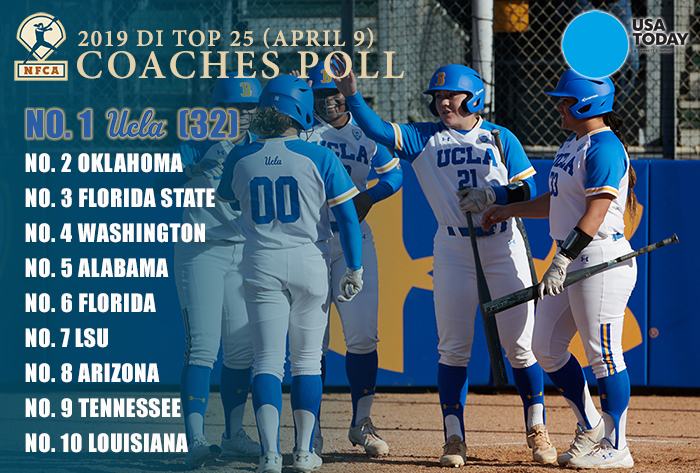 LOUISVILLE, Ky. –While the top three remained the same, including unanimous No. 1 UCLA, and no team moved in or out of the rankings, there was some shuffling amongst teams up and down this week’s 2019 USA Today / NFCA Top 25 Coaches Poll.

No. 2 Oklahoma swept Baylor in Big 12 play, extending the Sooners (35-2) winning streak to 25 contests. No. 3 Florida State went 2-1 last week, picking up a, 2-0, road win at then-No. 8 Florida before splitting an ACC doubleheader at Louisville.

Washington elevated two spots to No. 4. The Huskies (32-6) captured their third consecutive Pac-12 sweep, defeating California on the road and pushing their winning streak to 10 games.

No. 6 Florida and No. 8 Arizona each moved up in the poll, while No. 5 Alabama and No. 9 Tennessee fell. The Gators (32-9) bounced back from their loss to FSU by surrendering just one run in a three-game SEC sweep of then-No. 14 Arkansas. Extending their winning streak to 14 games, the Wildcats (32-7) set a program record by scoring 48 runs in a three-game Pac-12 sweep of Utah. Arizona outscored the Utes, 48-3, posting at least 13 runs in each of the three contests.

The Crimson Tide (38-4) suffered their first back-to-back defeats of the season, dropping games two and three in SEC play at then-No. 17 South Carolina. Alabama opened the week with run-rule wins over UAB and the Gamecocks (28-11) before their setbacks in Columbia, S.C. The Lady Vols (29-8) fell four positions after a 2-2 week. UT sandwiched two SEC wins over RV Missouri and then-No. 13 Auburn around a pair of home defeats to the Tigers (32-8).

No. 7 LSU and No. 10 Louisiana maintained their rankings. The Tigers (33-8) won their SEC series at Mississippi State, capturing the final two contests after a game one defeat. The Ragin’ Cajuns (33-4) picked up four more victories and ran their win steak to 10 after trumping McNeese State on the road and sweeping UT Arlington in Sun Belt Conference play.

The 2019 USA Today/NFCA Division I Top 25 Poll is voted on by 32 NCAA Division I head coaches, one representing each conference. The records reflect games played through April 7, 2019.

The 2019 USA Today / NFCA Division I Top 25 Coaches Poll is voted on by 32 NCAA Division I head coaches with one representing each of the NCAA’s Division I Conferences. Record reflect games played through April 7, 2019.