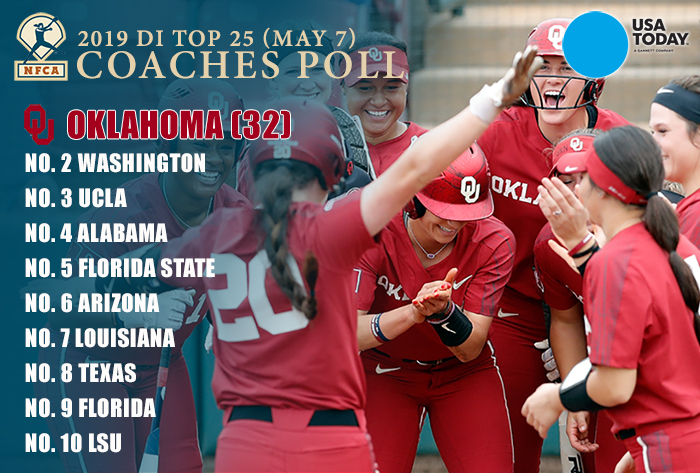 Extending their winning streak to 38 games, the Sooners (48-2) received all 32 first-place votes and 800 points. OU also extended its Big 12 streak to a program and conference-record 43 games with the three wins over the Cowgirls (37-14), which earned the Sooners their ninth straight league regular-season title.

No. 4 Alabama, No. 5 Florida State and Arizona remained in their respective positions. The Crimson Tide (50-6) became the first Division I program to reach 50 wins in 2019. Alabama swept then-No. 9 LSU in Baton Rouge (7-0, 4-3, 5-1) to earn its first regular-season title since 2014 and sixth overall. The Seminoles (48-8) wrapped up their regular season with an ACC sweep of Syracuse, outscoring the Orange, 31-6.

Louisiana and Texas moved into new spots at No. 7 and No. 8, respectively. The Ragin’ Cajuns (47-4) defeated Louisiana Monroe, 3-0, in a weather-shorted Sun Belt series. The one victory extended their winning streak to 24 games and improved the Ragin’ Cajuns’ record-setting league record to 25-0. The Longhorns (41-12) capped off their Big 12-series sweep of Baylor with 1-0 and 3-1 wins over the Bears in Austin.

No. 9 Florida and No. 10 LSU slipped down to the final spots of the top 10. The Gators (40-15) dropped two-of-three at home to Mississippi State, while the Tigers were swept at home by Alabama.

Joining the poll for the first time this season at No. 25 is Drake. The Bulldogs (40-14) have lost just one over their last 27 contests after four wins last week. Drake knocked off in-state foe Iowa State and swept Evansville to post its second straight 40-win season and match its own Missouri Valley Conference record with 24 league triumphs.

The 2019 USA Today/NFCA Division I Top 25 Poll is voted on by 32 NCAA Division I head coaches, one representing each conference. The records reflect games played through May 5, 2019.

Dropped Out: No. 25 Colorado State

The 2019 USA Today / NFCA Division I Top 25 Coaches Poll is voted on by 32 NCAA Division I head coaches with one representing each of the NCAA’s Division I Conferences. Record reflect games played through May 5, 2019.