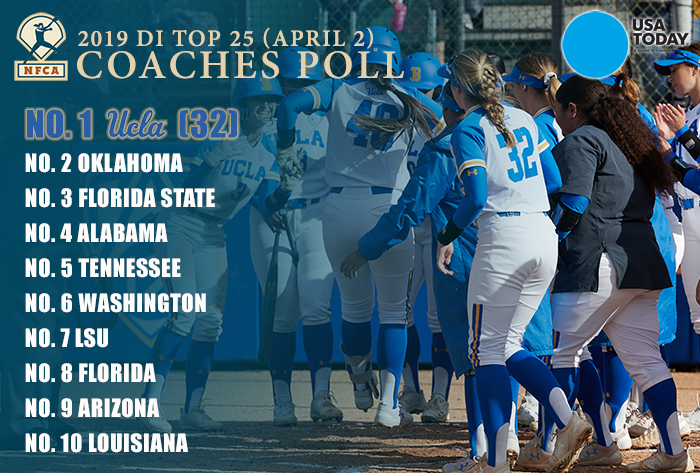 LOUISVILLE, Ky. – Unanimous No. 1 UCLA extended its winning streak to 16 games as the Bruins (32-1) enter their fourth week atop the 2019 USA Today / NFCA Top 25 Coaches Poll. Arizona returns to the top-10 for the first time since February 18, while No. 16 and No. 18 Ole Miss picked up big conference series wins over top-10 programs to make significant moves into the top-20.

UCLA enjoyed a 5-0 week at home. The Bruins opened the week with a pair of triumphs over UC Santa Barbara and Cal State Fullerton before taking all three matchups from the Bears, including two one-run victories.

Ole Miss, which moved up four positions, bounced back from a 15-inning game one defeat to knock off the Gators (29-8) 8-4 in eight innings on an Abbey Latham walk-off grand slam and 3-1 in the series finale.

No. 2 Oklahoma and No. 3 Florida State posted 3-0 marks, while No. 4 Alabama and No. 5 Tennessee both suffered one defeat in Southeastern Conference play. The Sooners (32-2) captured three non-conference wins, upping their winning streak to 22 games, and the Seminoles (35-3) swept Virginia in Charlottesville.

The Crimson Tide (36-2) topped Georgia Tech and took two-of-three from Mississippi State, while the Lady Vols (27-6) split an SEC doubleheader with RV Missouri on Sunday.

Washington and LSU each moved up one spot each to No. 6 and 7, respectively. The Huskies (29-6) swept Oregon State at home, shutting out the Beavers in games two and three. The Tigers (31-7) took two-of-three from then-No. 16 South Carolina and defeated Nicholls State in mid-week action.

No. 10 Louisiana (29-4) holds steady at No. 10 following a three-game Sun Belt road sweep of Georgia Southern.

The 2019 USA Today/NFCA Division I Top 25 Poll is voted on by 32 NCAA Division I head coaches, one representing each conference. The records reflect games played through March 31, 2019.

The 2019 USA Today / NFCA Division I Top 25 Coaches Poll is voted on by 32 NCAA Division I head coaches with one representing each of the NCAA’s Division I Conferences. Record reflect games played through March 31, 2019.