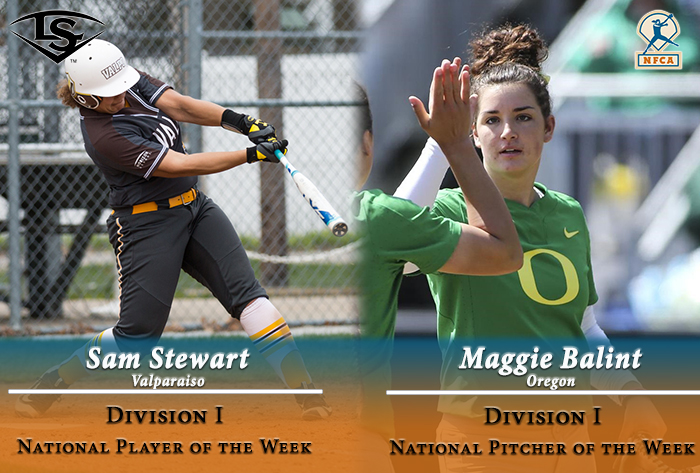 LOUISVILLE, Ky. – In the final weekly honors of the season, Valparaiso senior Sam Stewart and Oregon freshman Maggie Balint have been named Louisville Slugger NFCA Division I National Player and Pitcher of the Week, respectively, for games played May 1-7, announced the Association on Tuesday afternoon.

Stewart reached base safely in all 11 plate appearances, drawing eight walks, five of which were intentional and scored six time. When she did swing the bat, she singled and homered twice, setting the program’s single season mark with 15, and drove in three runs. In the opener of a three-game series against Wright State, she drew three walks before roping a leadoff single and scoring the game-tying run in the bottom of the seventh. She opened game two with a solo homer and after two intentional walks, Stewart clocked a two-run round tripper. On Sunday, Wright State did not pitch to the Horizon Player of the Week as she was walked in all three of her plate appearances, but did come around and scored the game-tying run in a 2-1 comeback victory. The catcher also recorded six putouts and two assists without a miscue behind the dish.

"Sam has grown so much as a player over her time here, and to see her have such an outstanding weekend in her final home series is a testament to all of her hard work and buy-in to our program and her role within it,” said Valparaiso head coach Kate Stake. “She had limited opportunities to swing the bat last weekend, but stayed focused and came through every time she was given the chance. It was also impressive to watch Sam stay locked in while being walked so many times and make a difference for us on the base paths. It was only appropriate that the final swing of her career on her home field ended up being a home run.”

Balint was stellar in two appearances, including a complete-game victory, against then-No. 2 Florida State. The rookie hurler was 2-0 with a 0.78 ERA with 11 strikeouts and three walks. She limited the high-powered Seminole offense to just four hits and a .100 batting average over nine innings of work. Balint tossed a complete-game three hitter with seven strikeouts in game two’s 3-1 victory. In the series finale, she came on in the eighth with runners at second and third and not outs in a 1-1 tied and proceeded to get the Ducks out of the jam. She struck out four batters in two innings of scoreless and hitless relief to earn the victory.

“It’s a great honor to be named national pitcher of the week,” said Oregon head coach Mike White. “Maggie had an excellent weekend against Florida State. She’s been very consistent all year for us and this is a great reward for all her hard work.”