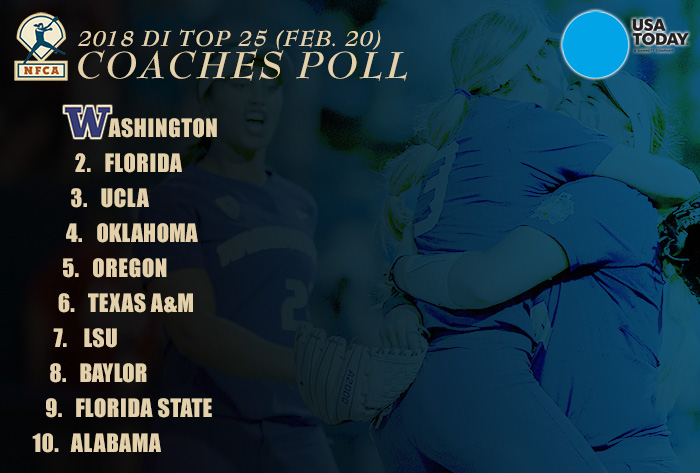 LOUISVILLE, Ky. –Undefeated Washington ascends to No. 1 in this week’s USA Today/NFCA Division I Top 25 Coaches Poll. In a wild week, the Huskies (10-0) were one of two top-5 teams not to suffer a defeat.

Washington returns to No. 1 for the first time since the final regular season poll of 2010. Behind a high-powered offensive, the Huskies have run-ruled nine of their first 10 opponents with their closest margin of victory being seven runs. Last week, UW participated in Sam Houston State’s Bearkat Invitational and outscored its opponents 46-1 and through 10 games outscored the opposition 116-4. That lone run in the tournament finale snapped an eight-game shutout streak.

UCLA moved up two spots to No. 3 as it went 4-0, including a 3-0 start at the Mary Nutter Classic I. The Bruins (9-0) posted three shutouts and surrendered one run in the four wins. Previous No. 1 Oklahoma, went 1-1 at a rain-shortened Troy Cox Classic in New Mexico. The Sooners (6-1) were upset by Boston University in their opener, 4-3, but rebounded with a 1-0 win over host RV New Mexico State.

Oregon slipped one spot to No. 5, following a 3-1 week at the Puerto Vallarta Challenge. After three shutouts to open the tournament, the Ducks (9-1) potent offense was held in check in a 1-0 nine-inning defeat to then-No. 15 Ole Miss.

Florida State dropped to No. 9 after a 4-1 week. The Seminoles (8-1) put in a strong showing hosting the ACC/Big Ten Challenge. FSU knocked off then-No. 14 Minnesota twice and split with No. 20 Michigan.

No. 10 Alabama suffered its first loss of the season and fell one position each. The Crimson Tide (6-1) went 3-1 at the Black & Gold Challenge, falling to then-No. 11 Baylor.

South Carolina, which is off to a 9-1 start, joined the top-25, tied for 24th with Utah. McNeese State dropped out of the poll after a 2-3 weekend.

The 2018 USA Today/NFCA Division I Top 25 Poll is voted on by 32 NCAA Division I head coaches, one representing each conference. Records reflect games played through Feb. 18.

New to Poll: No. 24 South Carolina

Dropped Out: No. 24 McNeese State

The 2018 USA Today / NFCA Division I Top 25 Coaches Poll is voted on by 32 NCAA Division I head coaches with one representing each of the NCAA’s Division I Conferences. Records reflect play through Feb. 18, 2018